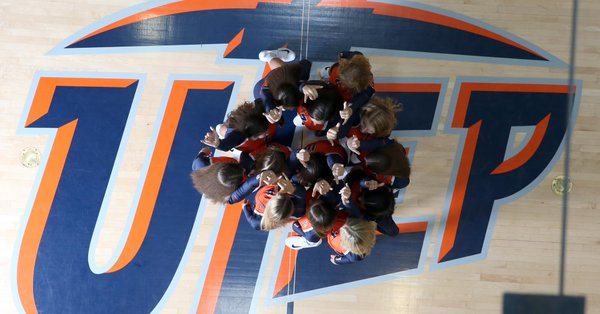 The UTEP volleyball team made their debut on Saturday, beating Western New Mexico 4-1 in an exhibition match that the two programs decided to take to five sets.

The Miners edged the Mustangs in the first set 25-23 and took the second set 25-20 behind a strong hitting performance from Macey Austin and newcomers Cheyenne Jones and Mallory Yost. The Mustangs avenged the losses by taking set three 27-25, but the Miners bounced back with their strongest hitting percentage of the match (.375), to dominate set four 25-16.

Jones led the Miners in kills during the set, hammering down six in her seven attempts and Niki Cebak kept the UTEP defense in check with eight digs.

“Our ball control and our ball handling was actually pretty good a lot of the match,” Watts said. “We just had a couple little runs there in the third set that ended up giving them a chance to win that one. We had a little bit of a lull in energy in the fourth and the fifth sets, but we were able to come back with a run of our own and push through to win.”

The Miners will now prep for the I-10 Cardinals Classic, hosted by Incarnate Word, Aug. 25-26. First serve against Tulane is 9 a.m. on Aug. 25 in San Antonio, Texas.