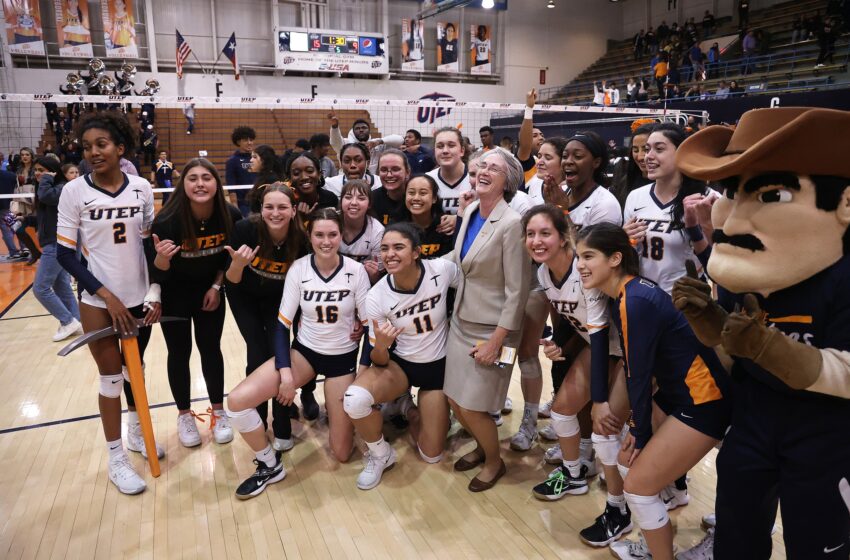 The Miners totaled 12 blocks and 11 service aces while hitting .225.

“That was a lot of fun,” head coach Ben Wallis said. “We grinded. Weber State started whopping us a little in the fourth set, but I think the real momentum change in the match was when Serena (Patterson) went back there and served eight in a row, just was wrecking serves, and Jeremiah (Larsen) had to take two timeouts in that run.

“Paulina (Perez Rosas) was huge,” Wallis said. “She went bigger and bigger, she passed it well when we needed her to. We threw Ema (Uskokovic) in there, who’s been very good all year, and she’s been standing on the bench waiting for her moment. And she got us three big kills and two big blocks in a set and a half, and hit .375 to help us win.”

The Miners were down 5-0 early in the set, and was even down 14-6 at one point. But UTEP used a 4-0 spurt that made the count 14-10. Weber State took a 21-16 lead after a Dani Nay kill. The relentless Miners used a 9-0 run to finish off the set and the Wildcats. Paulina Perez Rosas started the run with a kill assisted by Kristen Fritsche. Perez Rosas tallied a trio of kills.

UTEP were down 15-12, before taking a 22-20 advantage. With the set tied at 25, Weber State scored three of the last four points to tie the match.

The Miners edged out the Wildcats in a back-and-forth battle. Neither squad led by more than three points. UTEP found itself down 22-21 before Perez Rosas tied the set on a kill from an assist by Ryley Frye. A Kenidy Howard and Yasso Amin block assist pulled their squad ahead 23-22, while Amin followed with a kill to make it a two-point set (24-22). Weber State got within a point after an attack error, but another Amin kill sealed the deal to take a 2-1 advantage in the match.

Weber State won an epic back-and-fourth set after being down by as many as eight (16-8). UTEP used an 8-0 run to tie the set at 16. Weber State took a 20-17 advantage before UTEP answered with a 6-2 run taking the lead by just one point. After 12 set-points, Weber State closed out the set with a trio of kills to force a fifth set.

UTEP jumped quick to take the lead. Three consecutive kills by Perez Rosas, plus a service ace by Sianez, anchored the 8-2 advantage for the Miners. The Wildcats trailed 11-9, but were tamed by UTEP’s 4-0 run to win the match.

“It was a team effort,” Wallis said. “I’m really impressed with my team and I’m so impressed with this atmosphere. I’m so thankful to the City of El Paso. We need every single human being that was in here tonight, back here on Thursday at 7 p.m. against a very good UNLV team. They’re going to challenge us. They’ve got a great service team too, but so do we.

UTEP will host UNLV in the semifinals of the NIVC Thursday (Dec. 9) at 7 p.m. MT at Memorial Gym.