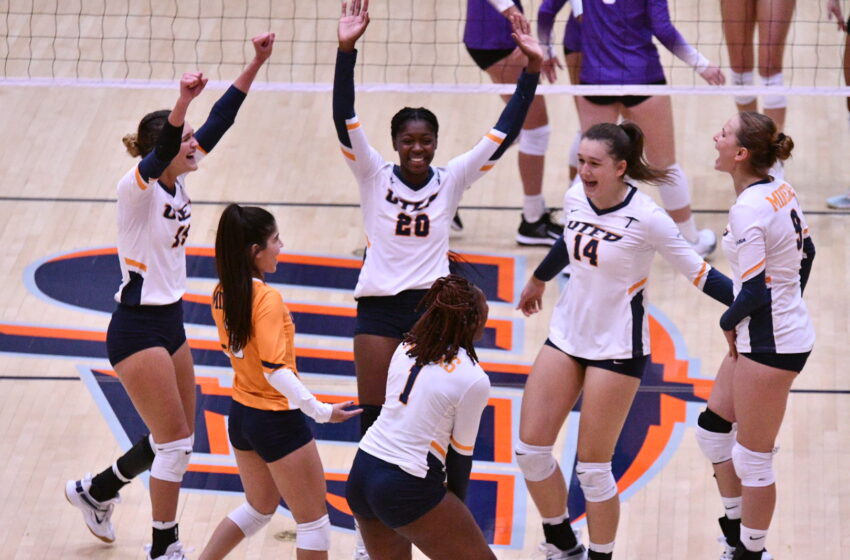 UTEP Volleyball fans were able to get a sneak peek of the 2021 Miners on Saturday afternoon in an exhibition match against Grand Canyon at Memorial Gym in El Paso. The preseason matchup resulted in a 3-1 victory for the host Miners.

UTEP won the first (25-21), second (25-22) and third (25-11) sets, while Grand Canyon took the fourth set (21-25) in a pre-determined four-set contest. After edging the Lopes by a handful of points in the opening two sets, the Miners put together a .650 hitting percentage in the third and held GCU to five kills, which were offset by an equal amount of hitting errors.

“I was pleased with a lot of things, mostly how we received it,” head coach Ben Wallis said following the match. “We’ve got some good veteran players and we were really good receiving it for long stretches, so when we receive it well we are a load to deal with. We’ve got five or six attackers who can really score. Grand Canyon is a really good defensive team and they challenged us early on. There was some good volleyball for a while there with long rallies and it was exciting for our crowd.”

Fourteen different Miners saw action in the exhibition match on Saturday, with newcomer Yasso Amin leading the offensive attack with a team-high 12 kills and .571 attacking mark. Paulina Perez Rosas notched 10 kills (.526) nine digs and a block, while Ema Uskokovic and Serena Patterson each added to the scoring effort with eight kills each.

Kristen Fritsche and Hande Yetis combined for 48 of the Miners’ 53 assists, while Alyssa Sianez had a team-best 11 digs and four assists. UTEP tallied 6.0 total blocks as a unit compared to 2.0 blocks by the visiting Lopes.

In addition to the nine returners leading the charge on Saturday, five new faces contributed on the floor for the Miners in the exhibition, including all available freshmen on the roster.

“We got a lot of our newcomers in there and all of our freshmen in, so it gives me some good video to sit and watch,” Wallis said. “[GCU head coach] Tim [Nollan]’s team is a good team from a good conference, so now we are going to have the chance to sit back and watch our video and lick our wounds a little bit. We did some things that we have to do a lot better job of, but I felt good about our performance and I was excited to get everybody in there and get some playing time for these players.”

The Miners will open the 2021 campaign on Friday, August 27 at the Idaho State Tournament where UTEP will face UC Irvine, Seattle and Idaho State in the two-day invitational.

Season tickets are still available for the 2021 UTEP Volleyball season, while fans can also purchase single-game tickets for individual matches. Group tickets are also available for $5 (minimum of 10 tickets).

Tickets can be purchased through the Eisenberg Family Ticket Office by calling (915) 747-UTEP, emailing tickets@utep.edu, go online or in person at 201 Glory Road (Brumbelow Building) Monday thru Friday from 8 a.m. to 5 p.m.