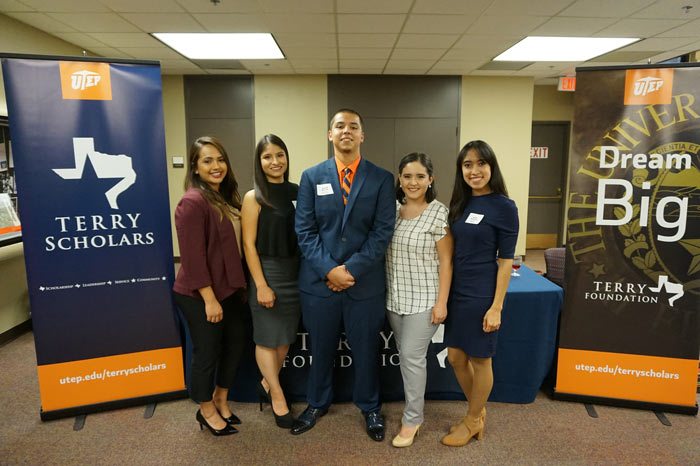 It was another late night at the restaurant. Jovanna Morales tended to customers and spent her breaks and any gaps between servings at a quiet corner table or behind the bar trying to get her homework done. At the end of every shift – often 3 a.m. – her feet ached, and all she could think about was crawling into bed to get as much sleep as possible before she had to wake up and do it all again.

During the day, Morales attended classes full time at El Paso Community College (EPCC) and at night worked serving tables and bartending. It was always a challenge juggling school and work, but she knew if she wanted to make her dream of a college education a reality, she had to work hard to pay her tuition.

Morales heard about the Terry Transfer Scholarship while accompanying her sister to the Office of Student Financial Aid at The University of Texas at El Paso. On their way out, she decided to stop by the Office of Scholarships to see what might be available should she choose to transfer to the University after completing her associate degree at EPCC.

“The Terry Transfer Scholarship stood out to me because of the amount of money for school it offered,” she said. “I thought, ‘No way could they provide this much support. I’d be set financially every semester.’ I took a chance and applied, thinking I would never get it.”

A few weeks after completing and submitting her application, Morales was headed for Austin, Texas to be interviewed by the Terry Foundation and was one step closer to receiving the scholarship that would make her dreams come true.

The Terry Foundation, a nonprofit organization, was established in 1986 by Houston businessman Howard Terry and his wife, Nancy. The Terrys believed that earning an undergraduate degree was fundamental to an individual’s future success.

The foundation’s mission is to improve and develop the State of Texas by assisting Texas students in attending the state’s finest public universities. The foundation hopes that through education, these students will go on to make significant contributions, not only in Texas but in the nation.

The first scholarship recipients, called Terry Scholars, were selected in the spring of 1987 at The University of Texas at Austin and Texas A&M University.

According to Corey Bailey, director of student development and Terry campus coordinator at UTEP, Terry Scholars are challenged to achieve their highest potential in scholarship, leadership and service to their university, the State of Texas and the world.

“Their common excellence unites Terry Scholars, and they are motivated by their pledge to give back to the foundation,” Bailey said. “Scholars build their own community of fellowship and mutual respect on campus and as part of the ever-expanding network of Terry Scholar alumni. These core values serve as the pillars of the Terry Scholarship Program.”

As the Terry Scholarship Program progressed, the foundation expanded upon its mission of helping students help themselves by offering the Terry Transfer Scholarship. This scholarship is awarded to nontraditional students who have earned at least 30 transferrable credit hours, are transferring from a Texas community college or university, are working toward their first baccalaureate degree and have been accepted for admission to one of the Terry-affiliated public universities in Texas.

At UTEP, five Terry Transfer Scholars are enrolled for the fall 2017 semester – the first time the transfer scholarship has been available at the University.

“Many students who obtain the transfer scholarship struggled to find ways to fund a college education, but worked hard so they could earn a scholarship that would cover the expenses,” Bailey explained.

Such was the case for UTEP junior Susana Lopez, one of the five Terry Transfer Scholars at the University. She is a first-generation college student who was planning to take only one or two classes per semester at UTEP after earning her associate degree at EPCC because she could not afford to attend full time.

“There aren’t very many opportunities for transfer students, especially for someone like me who attended high school in Mexico,” Lopez said. “Without the Terry Transfer Scholarship, I wouldn’t have been able to qualify for financial assistance to attend college.”

Terry Transfer Scholar and UTEP junior Idalis Ramirez remembers her microbiology professor at EPCC challenging her and her classmates to apply for scholarships. In return for applying to at least one scholarship, the student would receive an extra 10 points on their next exam. She happily took the challenge and ended up receiving the Terry Transfer Scholarship to attend UTEP.

“Receiving the Terry Transfer Scholarship really took the burden off of me financially,” Ramirez said. “Now I can just focus on school and do my best. The foundation is catering to nontraditional students, which is very important because a lot of these students may not qualify for financial aid. Instead of giving up due to financial burdens, this scholarship motivates us to further our education and aim toward earning our bachelor’s degrees.”

Ramirez looks forward to being heavily involved in activities and organizations while attending UTEP, a concept she says the Terry Foundation strongly emphasizes and supports.

Upon returning from her interview with the Terry Foundation in Austin, Morales learned that she, too, was among the five transfer students accepted at UTEP to receive the Terry Transfer Scholarship. Between overwhelming excitement and disbelief, all she could think was that for once she did not have to worry that her classes would be dropped if she could not come up with enough money before the deadline. She also thought about her parents and how much this scholarship would mean to them.

“I feel like this scholarship is not only for me but my parents, too,” Morales said. “I would have hated for them to feel like it was their fault if I didn’t get to attend UTEP because they couldn’t help me pay for school. A huge weight has been lifted off our shoulders, and this scholarship opens so many doors for me. I am very grateful.”