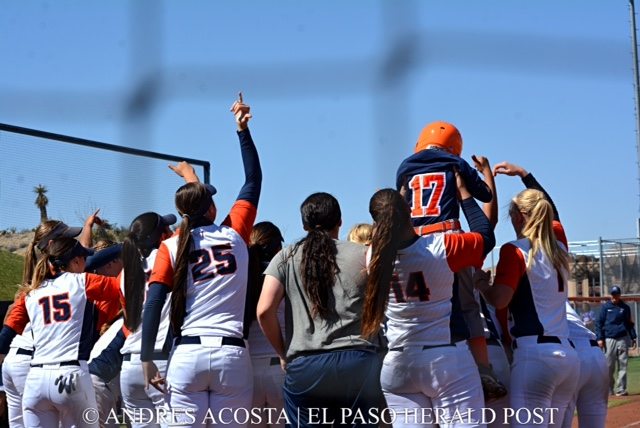 The UTEP softball team ended a six-game skid after taking down LA Tech, 13-7, in game one, while following with an exciting game two victory, 7-6 in eight innings, on Saturday afternoon at the Helen of Troy Softball Complex.

The Miners (11-18, 2-3 Conference USA) belted out 15 hits, including a Kiki Pepi solo home run and a Kawehiokalani Netane two-run blast in game one. The Lady Techsters (16-8, 0-2 C-USA) came back to tie game two in the sixth inning, but the Orange and Blue prevailed on a walk-off single.

“It was a good day,” third-year head coach Tobin Echo-Hawk said. “We had our great moments and we had our bad moments. It told the team they were super resilient regardless of what happened during the bad moments. They just kept going at it and playing hard. The team did whatever they could to win.”

Danielle Pearson had a great afternoon, as she recorded a career-high four RBI in game on a pair of doubles (also a career high), while picking up a victory and game-winning hit in game two.

It wasn’t a great start for Kaitlin Fifield and the Miners. LA Tech had an early edge to open the contest, as Krysta Tutsch’s two-run single put her squad up 3-0 in the opening frame.

UTEP answered with four runs of its own in the home half. Ariel Blair led off with a single to left and Kaitlin Ryder reached on a fielder’s choice, as Blair was called safe to second. Hot-hitting Courtney Clayton put the Miners on the board with an RBI single up the middle, plating Blair.

Pepi followed with a walk, while Taylor Sargent reached on a fielder’s choice due to Ryder being thrown out at home. Hope Moreno then reached first on an error by the first baseman, in which Clayton crossed the dish to make the score 3-2. Pearson gave her ball club a one-run lead, as she recorded a two-run double.

Again, the tides would turn as the Lady Techsters scored a trio of runs in the top second, going ahead 6-4.

But UTEP would score nine runs during the next three frames.

In the third, LA Tech forced two quick outs on fly out and a groundout. Netane, who had been struggling a bit, got on with a hard single to left field. Cortney Smith followed with a short single to the pitcher. Blair walked, as a wild pitch scored Netane. Smith would tie the contest 6-6 on a passed ball, while Ryder put the go-ahead run over with a single up the middle, plating Blair.

In the fourth, Pepi reached first on an error by short to leadoff and Sargent singled that set up a Moreno sac-bunt. Pearson knocked in her teammates on her second double of the game. Ryder would go on to tally another RBI, putting UTEP up 10-6.

The fifth frame was highlighted by Pepi’s fifth long ball of 2016 to lead off on a 1-0 pitch, while Netane slammed the nail in the coffin with a blast on the first pitch, her fourth of the season, that went over the second wall out in center.

Fifield (3-9) finally got off the snide as she ended a personal five-game losing streak. The native of El Paso hurled her fourth complete game of the season and striking out four. Fifield is 9-3 in her hometown during the last two seasons.

Ryder and Clayton each finished the game 3-for-5, while Pearson and Netane each went 2-for-4.

“We did a good job being confident and seeing the ball,” Echo-Hawk said. “We hit the ball pretty well against their two best pitchers.”

In the second inning, Pepi put the Miners up 6-0 with a two-out, three-run double on a line drive down the leftfield line.

In the second, Sargent led off the inning with a single, and eventually came around to score the first run of the second contest on a Smith single to right. Ryder, who is one of the league leaders in walks, used patience to get walked again with bases loaded, putting UTEP up 2-0. Clayton singled in Smith through the left side, setting up Pepi’s big knock.

Pearson cruised the next two frames, but LA Tech slugger Pauline Tufi connected on a three-run home run over left to cut the deficit to 6-3 in the top fifth. The Lady Techsters would tie the contest, as a critical error in the sixth with two outs and no one on extended the inning. Morgan Turkoly used a two-run single to make the score even.

But Pearson avoided any more damage, as she forced a fly out to right with two runners on to end the inning.

In the seventh, Caroline Sanchez (3-3) forced the Miners to go three up and three down. But Pearson returned the favor, as the Lady Techsters didn’t get anyone on in the eighth.

The drama was set for the home half and the Miner faithful. Sargent led off by striking out looking, but Moreno singled up the middle on a hard hit setting up Pearson. The senior also singled up the middle, but an error by the centerfielder proved costly, as Echo-Hawk blissfully waved in Moreno, who used her jets to race around second and third for the game-winning run. Echo-Hawk ran side-by-side with Moreno to greet her at home plate.

UTEP managed 10 hits, led by Moreno, Pearson and Pepi, who went 2-for-4 each.

UTEP and LA Tech will play the series finale on Sunday, starting at noon. Fans who wear orange will get in free.