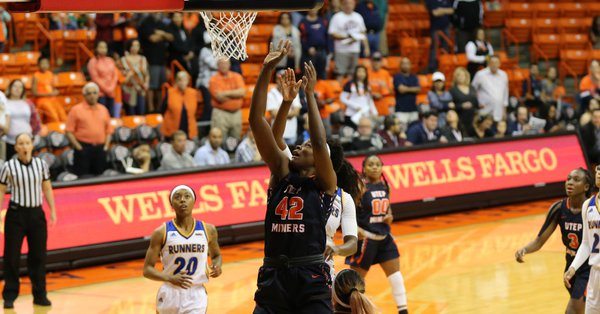 The UTEP women’s basketball team used a huge fourth quarter to rally past CSU Bakersfield, 67-56, in the 2017-18 season opener for both squads at the Don Haskins Center Saturday afternoon.

The Roadrunners (0-1) led by eight (45-37) through three quarters of action but the Miners opened up the final frame on an 13-1 run to help fuel a dominant 30-11 advantage over the last 10 minutes of action.

Senior Tamara Seda (20 points), junior Jordan Alexander (15 points) and sophomore Faith Cook (14 points) each established career highs to lead the way for the Miners, who were victorious in head coach Kevin Baker’s Division I coaching debut. Najala Howell (10 points) also reached double digits in scoring for UTEP, which nailed 51.2 percent (21-41) from the floor and 42.9 percent (6-14) from beyond-the-arc. The Miners shared the ball well with 17 assists on the 21 made field goals.

Alexander, who played her freshman year at DI Louisiana before transferring to Trinity Valley, grabbed a personal-best 10 boards for her first career double-double while Seda added eight caroms. UTEP won the rebounding battle, 36-30, which was aided by a whopping 16-2 advantage in the fourth quarter.

The Miners held CSUB to 32.8 percent (20-61) from the floor. Jazmine Johnson tallied 15 points to pace a trio of Roadrunners in double figures for scoring.

“I really have to hand it to our fan base,” Baker said. “I thought our fan base was phenomenal today and were there for us when we needed them. I thought in the fourth quarter we made some plays and all that, but I thought we just fed off the energy of our fans. I’m proud of our kids for really turning it on when the momentum was going the different direction. It’s a good win for the Miners today.”

UTEP started strong, racing out to 12-2 lead over the first nine minutes of the game, including back-to-back triples by Cook and Howell. CSUB was able to trim the deficit to single digits heading to the second quarter thanks to a heave from well beyond the 3-point arc by Aja Williams to beat the buzzer.

Williams nailed another trey on the Roadrunners’ first possession of the second quarter to make it a four-point game (12-8). The margin remained four (24-20) with 2:53 to play in the half before the visitors scored the next five points to take their first lead of the contest. Howell drilled a pull-up jumper to put UTEP back up by one but the visitors carried a one point-advantage (27-26) into the locker room thanks to Alexus Gilbert’s shot from the wing.

CSUB carried that momentum into the third quarter, ripping off seven straight points to lead by eight (40-32) with 3:51 to play in the frame. An old-fashioned three-point play from Seda brought UTEP within five on the ensuing possession, but CSUB countered immediately and the deficit stood at eight (45-37) heading to the fourth quarter.

The Miners were not done, though, as they scored seven straight to start the frame, including a highlight-reel fastbreak finish by Cook that brought the crowd to its feet. The Roadrunners stemmed the tide momentarily with a free throw by Daije Harris but UTEP went right back to work with a 6-0 run to surge ahead at 50-46 midway through the quarter.

CSUB trimmed the margin to one (51-50) before UTEP delivered the knockout blow with a 9-0 run over the next three minutes much to the delight to the Orange and Blue faithful. Alexander accounted for the first five points of the run, including a corner three.

Fans can get the scoop on that game while also reliving the opener by joining Coach Baker and Steve Kaplowitz for the first “Coach Baker Radio Show” from 6-7 p.m. at the Hilton Garden Inn University on Tuesday (Nov. 14).