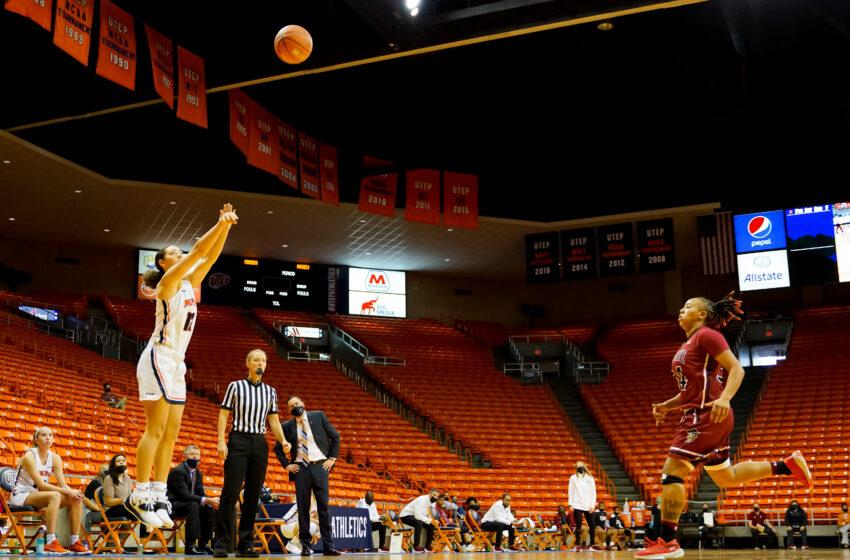 “We are excited to take our first road trip of the year to Logan, Utah,” said UTEP head coach Kevin Baker. “We know that we will have a tough match-up against a very well coached team. Our game also offers a unique feature as Michelle Pruitt will get to compete against her very own sister, Monique.

“All road games are a challenge because you are taken completely out of your comfort zone and asked to play at a high level.  There will be fans at our game, and this can add to the difficulty as it will now be even harder to hear the coaches through the masks. But, as always, we will embrace the adversity ahead we will play a great game.”

The Aggies own the all-time series with the Miners, 5-0, however, the two have not matched up since the 1979-80 season.

UTEP defeated rival New Mexico State in a second overtime game, 81-73, to sweep the Aggies for the second consecutive year. Sophomore guard Avery Crouse capped off a 7-0 run with a go-ahead 3-pointer with 3:48 left to play to give the Miners their first lead of the game. After the Aggies took the lead, 66-65, they fouled Crouse with one second remaining. She would miss the first but tie the game with her second attempt. In overtime, Gallegos knocked down her first go-ahead 3-pointer of the extra five minutes, 69-68. Junior guard Sabine Lipe – who finished with nine points and eight rebounds – swiped her first steal of overtime with the game tied, 71-71. Lipe found Gallegos for her fourth assist while Gallegos knocked down her next go-ahead 3-pointer, 74-71 – this time giving the Miners the lead for good.

Utah State extended its losing streak to three games after falling to BYU, 87-66, on Dec. 7. Graduate transfer forward Jessica Chatman led the Aggies for the second time in her first four games in Logan, Utah, in points (16) as well as rebounds (7). Guard Monique Pruitt came off the bench tied for a second-best 11 points.

Sunday’s contest marks the first time sisters Michelle Pruitt (UTEP) and Monique Pruitt (Utah State) have played one another in college. The two siblings are both Chicago, Ill., natives and were transfers from Miami Dade College. While Monique is currently in her first season at Utah State, Michelle enters her senior year after averaging 5.6 ppg at team-best 54 percent clip.

LAYING IT ALL OUT THERE

Junior guard Sabine Lipe has put her body on the line with the epitome of selfless play to open the young season. Through two games, Lipe has drawn five charges including one midway through the fourth quarter against Incarnate Word (11/28) which helped sway the momentum in the Miners’ favor.

Through three games – all of which the Miners have had to overtake a lead in the fourth quarter – UTEP has three scorers averaging double digits: Katia Gallegos with 21.3 ppg, DejaNae Roebuck with 13.0 ppg and Avery Crouse. Gallegos is fourth in Conference USA in scoring and second in steals (9).