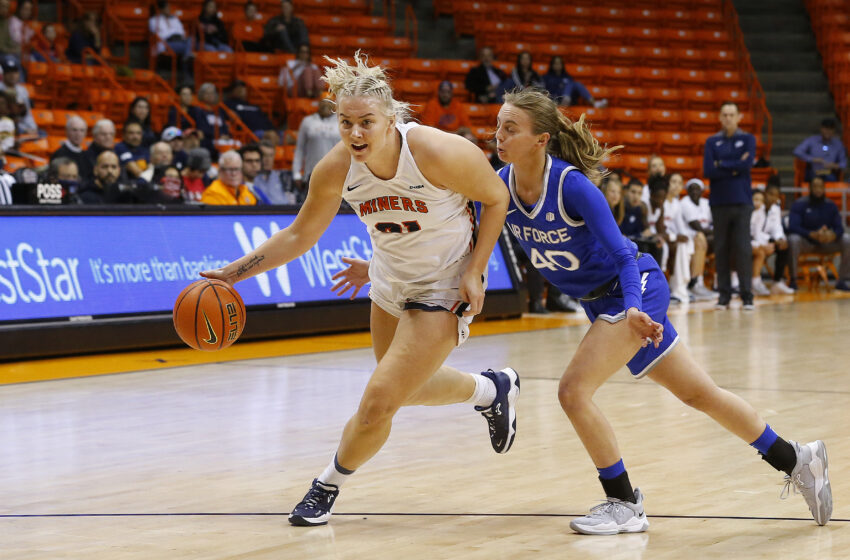 It was a wild back-and-forth game with 12 ties and 18 lead changes, but UTEP never trailed at any point of either of the overtime periods. The Miners’ attacking offensive and intent to get inside resulted in them finishing 33-48 (fifth most attempts in school history) at the charity stripe and 50 percent overall from the floor (29-58)

It marked the first UTEP double-overtime game since a 64-58 win against Marshall in the 2019 Conference USA tournament.

“This game could have gone either way with one play here or one play there,” head UTEP women’s basketball coach Kevin Baker said. “I’m just really proud of our team. This was a great win for our team. This is probably one of the best teams Air Force has had in a long time.

“We were just never going to quit or be out of the game,” Baker said. “We weren’t playing well or executing-maybe Air Force had a lot to do with that- but we just stayed at it. The thing that sticks out the most in my mind is when we had to have plays, we really executed well in double overtime. It just speaks to the resiliency of our team. I couldn’t be prouder.”

UTEP opened up the contest on a 6-0 run, with four points by Battle and a pair courtesy of Crouse before Air Force got on the board with a triple three minutes into the contest. Arike countered with an old-fashioned 3-point play to reinstate a six-point cushion (9-3) with 6:53 remaining in the quarter. The Falcons struck back with eight points in a row to surge into the lead (11-9) with 2:09 left. It was back and forth the rest of the way, with the two sides knotted at 14 through 10 minutes of action.

The Miners peeled off five straight points over the first two minutes of the second quarter to break the deadlock. It remained a five-point cushion (21-16) with 7:25 left in the period before five consecutive points by the Falcons evened the tilt with a 5-0 run of their own. Neither side led by more than three the rest of the frame, with Air Force clinging to a one-point advantage (40-39) over the Orange and Blue heading into halftime.

The Falcons nailed a triple out of the gates of the third quarter, affording them the chance to go out by four (43-39). That began a pattern of UTEP cutting it to two on multiple occasions before a little 6-0 run got it back ahead by a pair (49-47, 4:42 3Q). It was then time for the run by the visitors, who rattled off a 12-2 push to grab their largest advantage (59-51) of the affair with 50 seconds to play in the period. Gallegos halted it with a spin-around jumper in the lane. After a defensive stop, Battle cleaned up a lay-up to allow the Miners to creep within four (59-55) heading to the fourth quarter.

The surge continued into the final frame, where the Miners pulled even at 63 before two Air Force free throws put it back ahead immediately. UTEP tallied four in a row, including a breakaway lay-up by Battle to reinstate a Miner lead. It was short lived, with four straight points from the Falcons putting them up two with two-and-a half to play. A Gallegos free throw was followed by a stop and a basket by Arike, propelling the Miners back up by one. Air Force then tallied four consecutive points, prompting a UTEP timeout down three (73-70) with 61 seconds to play. After a free throw, UTEP came up with a steal. Wilson calmly sank both free throws to tie the tilt and send it to OT after a Miner stop.

Gallegos (three) and Crouse (one) put in work at the line to send the Miners out by four three minutes into OT before the Falcons got a field goal to make it a one-possession game (77-75). After a Battle floater in the lane, an Air Force triple cut the deficit down to one (79-78) with a minute to play in the extra period. Gallegos drilled two more free throws but the Falcons sunk a triple to tie the tilt with 31 seconds left in OT. Both sides committed turnovers on the ensuing possessions, and the contest headed to double overtime.

Battle got the Miners on the board first with a nice move in the post to start double OT, which was followed by a stop and a UTEP free throw. Air Force had a lay-up off two offensive boards to get within one but Battle went back to work for another post score. The Falcons immediately clawed to down one but once again Battle answered down low with a head fake score. After a Miner stop, Gallegos cleared and was fouled intentionally. A tech away from the ball led to more free throws, and when the dust was settled UTEP had put the contest away.