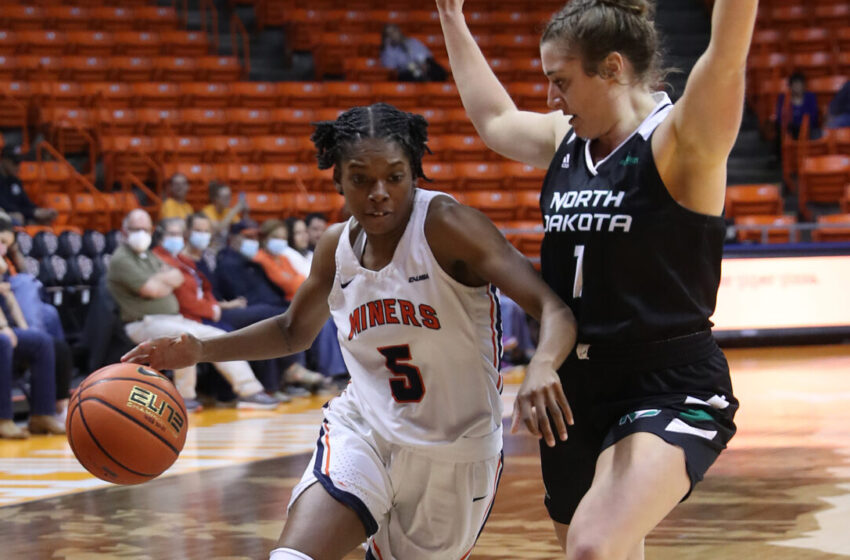 The UTEP women’s basketball team opened up the game on an 18-4 run and never looked back on the way to am 89-69 victory against North Dakota Saturday afternoon.

The effort improves the Miners to 2-0 for the fourth straight season. UTEP has scored 80+ points in back-to-back games to start the season for the first time since 1994-95. It’s also the first time in four years with consecutive wins by at least 20 points to tip off the campaign.

The Orange and Blue’s advantage was 23 (53-30) at the break, thanks to the sixth-most points in the first half in program annals. They controlled in the second half, never letting the visitors back into the contest. UTEP connected on 50.0 percent (34-68) from the floor and forced 21  turnovers that were converted into 22 points.

Destiny Thurman (career-high 23 points), Elina Arike (career-high 19 points, career-best 15 rebounds) and Katia Gallegos (13 points, eight assists) all had big days to lead the charge for the Miners. It marked the first career double-double for Arike. Thurman went 8-14 from the floor, including 3-6 from distance. Arike was also efficient at 7-10 shooting. Both Thurman and Arike were 4-4 at the charity stripe. Mahri Petree came off the bench to also reach double figures in scoring with 11 points.

“For the most part I’m really pleased with how we played” UTEP head coach Kevin Baker said. “It’s really hard to keep your focus for 40 minutes when you build a big lead early. We made some great plays out there, shot the ball well. I couldn’t be happier. We’re getting better every time we touch the floor and hopefully that’ll remain the case.”

After North Dakota scored the first points of the contest, the Miners struck back with a 10-0 run to force a timeout less than three minutes into the game. UTEP continued to pour it on as the quarter wore on, eventually using an 18-2 run to lead by 14 (18-4) with four minutes left in the frame. UND stopped the surged, but a mini 5-2 push made it an 18-point differential (28-10) through 10 minutes of action.

Back-to-back three pointers turned it into a 24-point affair (34-10) one minute into the second quarter. It was the back-and-forth the remainder of the stanza, allowing the Miners to carry a 23-point cushion (53-30) going into halftime. Thurman was instrumental in the dominating first half, piling up 17 points to eclipse her prior career best of 16.

UTEP remained in control throughout the second half, with the Fighting Hawks never truly threatening to get back into the game. The margin grew to as much as 29 at one point before the Orange and Blue had it on cruise control down the stretch.,

The Miners will be back in action for the “Battle of I-10” against NM State at 7 p.m. MT Wednesday (Nov. 17). Miner fans can listen live with Mando Medina on the call for 600 ESPN El Paso and the UTEP Miners App. Tickets start at $8 while groups of 10 can purchase tickets for $5 a piece.