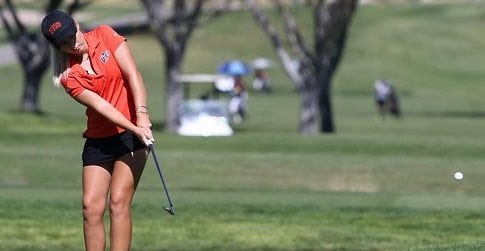 The UTEP women’s golf team is on a roll, shooting under 300 in five of its last six rounds, heading into the 2018 Conference USA Championships Monday through Wednesday (April 16-18) at the Verandah Club in Fort Myers, Fl.

A similar result in the Sunshine State next week would put the Miners in the hunt for their first league title since 2011.

“At the beginning of the year our goal was to win the conference championship,” UTEP coach Jere Pelletier said.  “We have worked hard to be prepared to accomplish that goal.  The team is playing well and hopefully peaking at the right time.”

Statistically, the Miners enter the tournament ranked eighth in the league (no. 116 nationally by Golfstat), but only nine spots behind fourth-place WKU (no. 107).  UTEP entered the 2011 championships rated seventh nationally, so anything can happen when a team gets hot.

The highest-rated teams in the field are no. 52 Old Dominion, no. 75 UTSA and no. 82 Middle Tennessee.

UTEP has finished in the top-three at six of nine tournaments this season and won the Little Rock/A-State Invitational on March 27.

Eighteen holes will be contested each day following Sunday’s practice round.