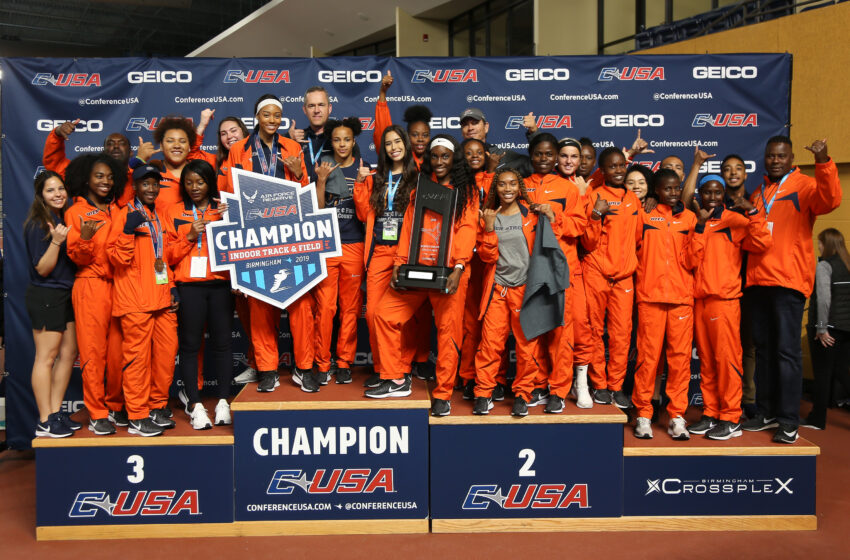 “Coaches are extremely proud of the women’s championship team,” said head coach Mika Laaksonen. “Girls came out strong this weekend and fought hard from beginning to end. I don’t think anything went wrong for us and we got all the points we were supposed to get plus more.”

It all came down to the final event of the day, the women’s team headed into the 4x400m(Dreshanae Rolle, Madison Gibson, Kimisha Chambers and Annette Bolomboy) race with 81.50 points with Charlotte closely behind with 75 points. UTEP took the track first in the second heat of the relay.

The Miners battled it out with North Texas every step of the way but Chambers held on to the lead in the third leg of the relay. Bolomboy sustained the lead and won the heat for the team with a season-best time. The squad would have to sit and wait for the final heat, which featured Middle Tennessee and Charlotte.

The women wasted no time in earning a spot on the top of the leaderboard after finishing first and second in the first track event of the day. Senior Lilian Koechran a steady race and challenged teammate Carolyne Chepkosgei in the mile.

The next event for the Miners was the 60m hurdles featuring Chambers, Rebecca Oshinbanjo and Maribel Caicedo. Chambers led the group notching a bronze medal with a personal-best time of 8.46. Oshinbanjo and Caicedo took fifth (8.68) and sixth (8.69), respectively. The trio helped the team earn 13 points.

Sophomore Bolomboy was the lone Miner in the 400m finals. She helped UTEP garner two points, finishing seventh overall with a time of 56.70. Teammate Chambers took the track once more in the 200m. The junior posted a sixth-place finish (24.54) claiming three additional points.

Koech and Chepkosgei took the track once again in the 800m finals. Koech was the top finisher for the Miners taking silver with a time of 2:11.12. Chepkosgei followed closely behind clocking in at 2:11.27 earning a bronze medal. Teammate Karoline Daland also took the track for the second time in her collegiate career in the 800m. She helped the squad earn two points with a seventh-place finish posting a personal-best time of 2:13.34.

On the field, freshman Chantoba Bright earned a spot on the podium in her first C-USA Championship appearance. She took bronze posting a leap of 13.15m (43-01.75) in her second attempt of the final day of competition.

Carshaylah Harrison secured points in the high jump with a personal-best leap of 1.66m (5-05.25).

The men’s 400m final was split into two heats. The first heat included junior Sean Bailey. He got off to a slow start but a late kick in the final lap put him in a photo-finish situation, which showed Bailey winning the heat with a time of 46.89. Bailey garnered a spot on the podium, finishing third overall in the event.

Next up for the Miners is the NCAA Indoor Championships on March 8-9 in Birmingham, Al.