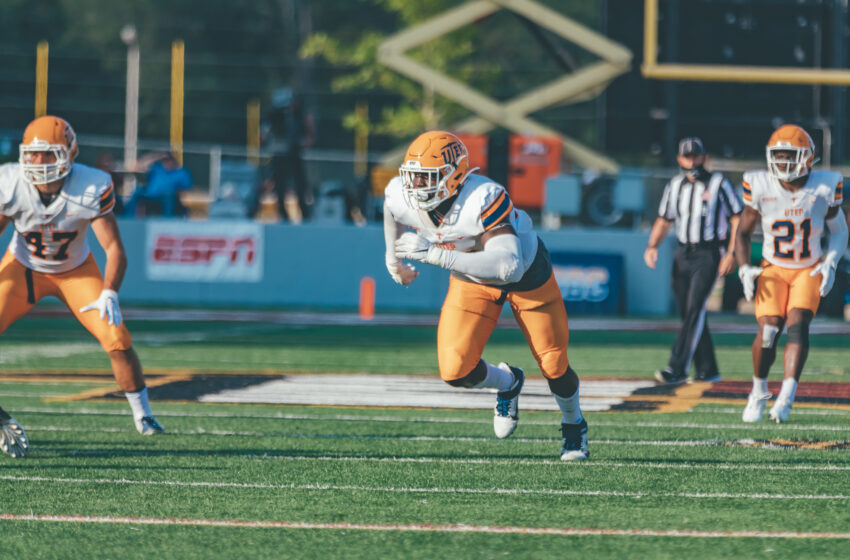 UTEP defensive end Praise Amaewhule has been named to the preseason watch list for the Maxwell Football Club’s 27th annual Chuck Bednarik Award powered by Mammoth Tech, which is presented annually to the nation’s most outstanding defensive player in college football.

Amaewhule earned Second Team All-Conference USA honors in 2020 after starting all eight games for the Miners at defensive end. He led the Miners with 8.0 tackles for loss (50 yards), 7.0 sacks (48 yards) and nine pass breakups.

“It is an honor for Praise to represent our program on such a prestigious watch list as we prepare for the 2021 season,” head coach Dana Dimel said. “He was a constant leader on the field for us last year and this accolade is well deserved for the amount of work he puts in to hone his craft.”

A redshirt sophomore defensive end for the Miners, Amaewhule is one of six Conference USA players to be named to the preseason watch list for the Chuck Bednarik Award.

The Chuck Bednarik Award has been presented to the College Defensive Player of the Year since 1995 and is named in honor of Chuck Bednarik, a former standout at the University of Pennsylvania and with the Philadelphia Eagles.

The Bednarik Award watch list is comprised of 90 candidates on the defensive side of the ball. Last year’s winner Zaven Collins (Tulsa) and fellow finalists Jeremiah Owusu-Koramoah (Notre Dame) and Patrick Surtain II (Alabama) have all moved on to the NFL. The list features two returning semifinalists from 2020, Myjai Sanders (Cincinnati) and Kyle Hamilton (Notre Dame).

There are 11 schools that have two candidates on the Bednarik watch list.

Athletic department officials add that season tickets are now officially on sale for the 2021 UTEP Football season. Ticket prices start as low as $65 and flexible payment plans are available.

The 2021 UTEP Football season opens on Saturday, August 28 with the “Battle of I-10” versus NM State in Las Cruces. Kickoff is set for 7:30 p.m. MT at Aggie Memorial Stadium.

The UTEP Football home opener versus Bethune-Cookman is scheduled for Saturday, September  4 at the Sun Bowl and will kick off at 7 p.m. MT.