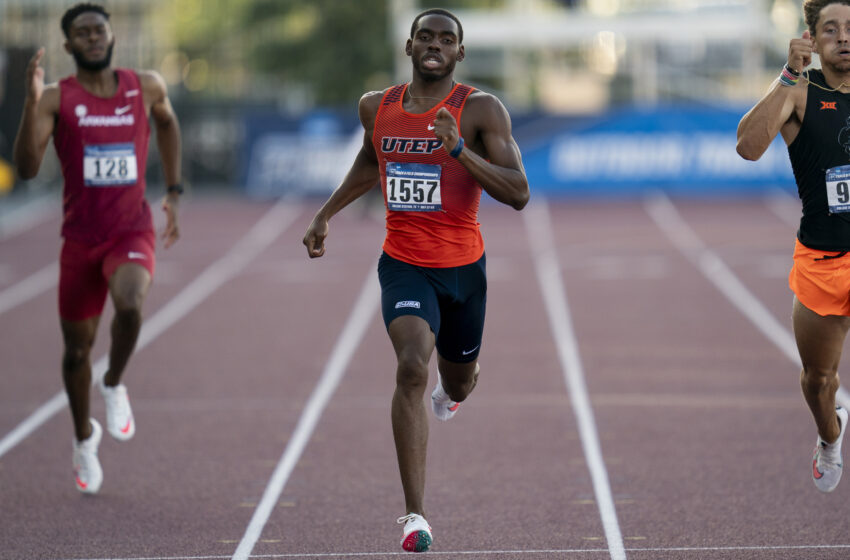 EUGENE, Oregon – Sean Bailey will represent UTEP in the 400m finals – the first to do so in 38 years, and Paulo Benavides leaped his way to NCAA All-American first team honors on Wednesday during the first day of competition in rainy conditions at the 2021 NCAA Outdoor Track and Field Championships at historic Hayward Field in front of 5,060 spectators.

“Pretty good opening day for us here in Eugene,” UTEP Head Coach Mika Laaksonen said. “Our pole vaulter Paulo started everything very well for us. In difficult conditions, with the first half of the event being impacted by heavy rain, Paulo competed hard. He eventually placed tied for seventh place and earned his first All-American first team honors. What way to close out one’s collegiate career.”

Bailey finished third in heat 2, clocking in a time of 45.74 in the 400m semis. The senior placed eighth out of nine overall. Bailey is the first Miner to advance to the finals since 1983 when Bert Cameron won the event. North Carolina A&T’s Randolph Ross finished with a tine of 45.24 to place first overall, while BYU’s Michael Bluth was ninth (45.78).

“Sean ran timid the first 200 meters of his race and had to close with a flurry to have any chance to advance into the final,” Laaksonen said. “Fortunately, his time was fast enough for him to qualify into Friday’s final and I’m sure Sean will take a very different approach to that race.”

The men’s 4x400m relay team didn’t finish the race (DNF) due to Kevin Hewitt, the third leg, being tripped by another runner and falling to the ground after Jevaughn Powell’s handoff.

“The day ended in a terrible way by the third leg of our 4×400 relay, colliding with a runner from Alabama and going down as a result of it injuring himself in the process,” Laaksonen added. “These things happen in a relay and sorry it had to happen here. A very good relay team will have to watch the finals from the sidelines on Friday.”

Roosa Yloenen will take the field on Thursday in the women’s javelin finals. Yloenen will throw at 5:45 p.m. MT/4:45 PT, and will be streamed on ESPN3.