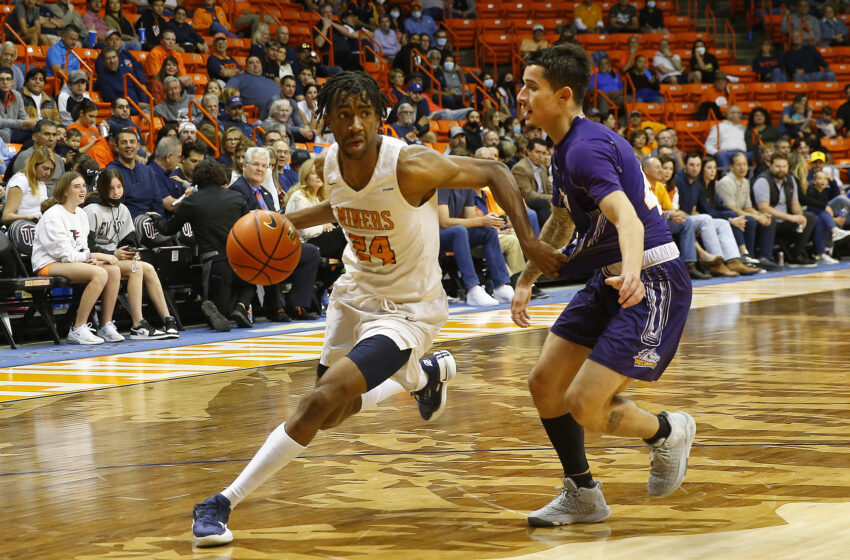 Anyone who comes across UTEP point guard Jamal Bieniemy inevitably brings up his uncle, Eric, who was an All-American running back at Colorado, played nine seasons in the NFL and is now the offensive coordinator of the Kansas City Chiefs.

And while Jamal always politely answers any questions someone may have, he’s now making a name for himself as result of his prowess on the basketball court.

“My uncle did what he did. He was a great player and is a great person,” Bieniemy said. “He’s somebody to look up to, and I have a long way to go. I have to keep working every day.”

“I feel like I have a lot more I can do every night,” Bieniemy said. “I try to lead by example. A lot of people can talk about it, but it’s hard to do it every day.”

A new challenge this year is running the point for first-year head coach Joe Golding, who was a four-year letterwinner (1994-98) at the position at ACU, playing in all 108 games. That puts extra emphasis and attention on Bieniemy, but he’s up for the challenge.

“Having Coach Golding and Coach Boykins (12 years in NBA) around, two players who really know the position is a lot (for me) to learn from,” Bieniemy said. “They always have good advice (to share).”

As far as Golding, it’s safe to say he’s a fan of the man affectionately known as “JB.”

“He’s done a great job of leading our team,” Golding said. “Him and I are building a really good relationship, and I’m really proud of him. He’s playing at a high, high level. I think he’s an All-Conference player. He’s playing with a chip on his shoulder. He can score the basketball, and I think he can be an elite defender. He’s really buying in on the defensive side of the ball.”

But at the end of the day, both Bieniemy and Golding care simply about one thing; Winning.

“All point guards are judged on winning,” Bieniemy said. “That’s something I feel I’ve been doing my whole life, and it’s the standard I hold myself to on and off the court.”

“I don’t care about stats with point guards” Golding said. “It’s all about wins and losses.”

Bieniemy has a whimsical side too, with his favorite food being brownies. When asked to explain, it’s simple enough.

Back on the court, Bieniemy started every game of last year and has done so as well in 2021-22. He had solid numbers across the board in the COVID-19 affected season a year ago, putting up 8.6 points per game, 4.0 assists per game and 1.2 steals per game in 32.7 minutes per game. His assist stat line was the most by a Miner (by average) since 2016-17, but last year is in the rearview mirror.

“Last year was a whole different year on and off the court, but this is a new year (with new opportunities),” Bieniemy said. “I’m trying to get better every day and help my team win as many games as possible.”

Whether he plays one or two more years at UTEP remains to be seen (student-athletes were awarded an extra year of eligibility due to COVID), he does aspire of continuing his career at the next level. He’s just not too worried about how he gets there.

“I just feel like if I keep working hard and am consistent in that every day,” Bieniemy said. “All of that stuff will take care of itself.”

While has those high aspirations of continuing his basketball career beyond the collegiate level, he’s already making plans to invest in real estate and spend quality time with his family

He is majoring in communications, which he sees being used for so many things.

“I’ve learned some great things about communicating,” Bieniemy said. “Like speaking in large groups, that’s something that’s helped me a lot.”

Another cool thing for Bieniemy this year is the opportunity to play alongside Emmanuel White, who he’s been best friends with since the first grade.

“It’s really cool,” Bieniemy said. “Having the freedom to do the things (he wanted) I felt that was important, so it’s great to have that experience.”

Bieniemy enjoys reading, and his favorite book is called the “Compound Effect.” In essence it’s the principle of reaping huge rewards from a series of small, smart choices. While it probably wasn’t penned with basketball in mind, it’s not a big leap to see how it applies to the hard wood.

It’s happening faster and faster for Bieniemy in 2021-22, both on and off the court.

For all things UTEP Basketball, click here; for our complete coverage of the UTEP Miners, click here.