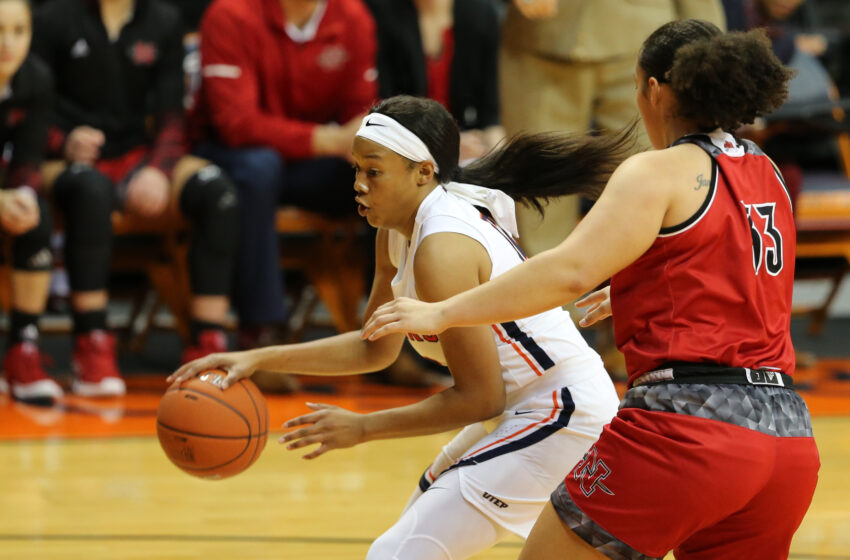 Ariona Gill (14 points) and Jordan Alexander (season-high 12 points) hit double figures in scoring as UTEP rallied back from a 17-point second-quarter deficit to regain the lead several occasions in the fourth quarter only to have visiting Nicholls State pull out a 58-56 win as part of the UTEP Thanksgiving Classic at the Don Haskins Center Saturday afternoon.

Nicholls State countered with eight straight points to vault out by five (50-45) before the Miners tallied the next six points to jump ahead by one (51-50). It was a seesaw battle the rest of the way, with a pair of free throws from Cassidy Barrios providing the seventh and final lead change with 52 seconds left. UTEP had a chance to tie or win it with two seconds left, but was unable to get a shot off.

Barrios produced a game-high 22 points to go along with eight rebounds and seven assists to lead the way for Nicholls State. She was supported by a nine-point effort from Kinzie Heineman.

UTEP connected 42.6 percent (20-47) from the floor, including 8-20 on 3-pointers, while also committing a season-low 13 turnovers but issues elsewhere doomed the home side. The Miners were 8-17 on free throws and were outrebounded, 34-27.

“We lost game in the first half,” UTEP head coach Kevin Baker said. “I have to do a better job of getting our team ready to play. We played better in the second half because we played with a better sense of urgency.”

UTEP started off well, scoring the first five points of the contest. The advantage remained five (9-4) with 4:08 to play in the period before the Colonels ripped off five straight points to pull even (9-9). UTEP regained the lead after a pair of free throws from Gill but a lay-up to beat the buzzer knotted the game at 11 through 10 minutes of action

The home side went cold in the second stanza, allowing Nicholls State to tally the first 17 points in the frame to vault out to a 28-11 advantage with 2:56 to play in the half. UTEP whittled the deficit down to 13 (30-17) heading to the locker room. The margin was nine (38-28) with 4:38 left in the third quarter before UTEP started to make its move. The Miners uncorked a 12-2 surge over the next four minutes to tie the tilt at 40 before a Barrios jumper gave Nicholls State a two-point edge (42-40) going into the fourth quarter.

UTEP tallied the first five points of the final frame, using a jumper from Gill and one of a career-high four 3-pointers from Alexander to grab that 45-42 edge. Nicholls responded with the aforementioned 8-0 run, aided by back-to-back treys from Heineman. Another Alexander triple was followed by an old-fashioned 3-point play by Katarina Zec to put UTEP back on top. Nicholls State peeled off five straight to put UTEP down by four (55-51) with 2:09 left. The Miners scored five straight to regain the lead, and it appeared as if they could claw out the victory. It was not to be, though.

UTEP will wrap play at its Thanksgiving Classic by facing undefeated Abilene Christian (5-0) at 7 p.m. MT Saturday. Nicholls State will face Texas Southern at 5 p.m. MT Saturday. One ticket serves as admission for both games. They are $5 for adults and $3 for kids, and may be purchased by calling (915) 747-5234.