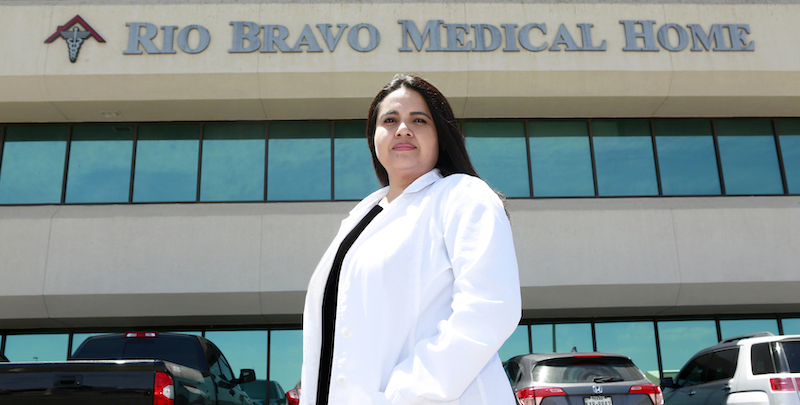 Two years ago, Michelle Calderon would cringe at the thought of speaking in front of a large group of people. Today, Calderon, a family nurse practitioner for 10 years, is a vocal advocate for patients suffering from headache disorder.

Calderon, a headache management expert and a Primary Care Pain Champion for the U.S. Department of Defense (DOD), attributes her growing confidence to The University of Texas at El Paso’s Doctor of Nursing Practice program, or DNP.

“When I first started the DNP program, I was so scared of standing up in class and giving presentations,” Calderon recalled with a laugh. She credits courses such as the DNP’s Organization and Systems Leadership class with boosting her confidence.

“I can talk to anyone now,” Calderon said. “I feel I’m a better leader at work. I learned that by focusing on employees’ strengths, they are more engaged and perform better. The DNP program prepares us so well to take on leadership roles.”

On May 15, 2021, Calderon will be one of more than 100 advanced practice registered nurses to graduate from the DNP program since its inception 10 years ago in UTEP’s School of Nursing. The program will confer its 101st doctoral degree during UTEP’s Spring 2021 Commencement Ceremony at Sun Bowl Stadium. Aside from Calderon, Guillermina A. Nelson, George Egesi, Tanya M. Guerrero, Lirio E. Lopez-Urias, Monicke Magnon, Pamela O. Ogbonna and Chinonye O.Onuchukwu-Azuonye will graduate from the program.

“This is a major milestone for our DNP program and also for health care in our region,” said School of Nursing Dean Leslie K. Robbins, Ph.D., who was instrumental in establishing the DNP program at UTEP in 2011. “Our graduates include nurse practitioners, nurse anesthetists, certified nurse midwives and clinical nurse specialists, who serve different patient populations. We’re really moving the needle toward enhancing health care in our region by preparing nursing leaders with the expertise they need to positively impact the quality of care patients receive.”

The Doctor of Nursing Practice is one of two terminal degrees in the field of nursing. While a Ph.D. in nursing is a research-focused program, the DNP is focused more on clinical practice. UTEP’s DNP program prepares graduates with the skills they need to translate evidence-based nursing research into patient care.

The UTEP program, which focuses on border health, was designed to increase the number of Hispanic doctoral graduates.

“Culturally diverse health care leaders and providers are better able to reflect the patient population served,” Monsivais said. “This is an important step in decreasing health care disparities that arise from provider biases and poor patient-provider communication. This cadre of leaders are prepared to lead change to improve the quality and safety of the rapidly changing and increasingly complex health care system.”

Throughout the DNP program, students meet face to face on campus one weekend a month for five semesters. The program moved online during the pandemic.

During their first semester, students begin work on a DNP project that is focused on translating research into clinical practice. They identify an area for improvement in an advanced practice setting. They then implement an evidence-based quality improvement project that will lead to positive health care outcomes within the organization. Students present their findings during the program’s final semester.

Last fall, Calderon, a nurse practitioner for seven years at Rio Bravo Medical Home, a William Beaumont Army Medical Center outpatient clinic, spent 10 days evaluating the clinic’s patient data. She noticed that although headache pain was a frequent complaint, the clinic lacked a standard protocol for assessing and treating headache pain. Most providers, including Calderon, would treat patients based on their own experience and not necessarily on evidenced based practice.

To amend the situation, Calderon implemented an evidence-based clinical practice guideline from the VA/DoD (Veterans Affairs/Department of Defense) that the clinic’s providers could use to accurately diagnose headache pain.

Her goal was to standardize the management and treatment of headache disorders among the clinic’s providers by having them follow an algorithm in which they asked patients a series of questions such as how long have they had a headache or to describe the pain they felt.

By following VA/DoD guidelines, Calderon, who received the National Headache Foundation’s Certificate of Added Qualification in Headache Medicine (AQH) in March 2021, said she and her colleagues were able to focus on each patient’s specific headache diagnosis. As a result, patients received appropriate headache treatment, which led to a decrease in patients’ headache days and fewer office visits.

“Before the guidelines, I felt like continuity of care was lacking,” said Calderon, who will present her project at the UTEP DNP Symposium on Thursday, May 13, 2021. “This project is cost-effective. It streamlines the patient’s treatment and it helps improve continuity of care. It benefits everybody.”

The Performance Improvement Committee at William Beaumont Army Medical Center has decided to continue Calderon’s project for another year, during which time they will evaluate its effect directly on patient outcomes. If successful, the project is expected to be implemented at other primary care clinics at Ft. Bliss and possibly at other U.S. Army bases in the future.

In April, the DOD named Calderon a Primary Care Pain Champion. She will work with pain champions from other DOD facilities to improve pain care options in primary care.

Calderon said her success in the DNP program is due to the support she received from the program’s faculty, fellow DNP students, her clinic’s staff, and especially her family. One of her biggest supporters was her father-in-law, Oscar Calderon, who encouraged her to apply to the program. Oscar Calderon, a retired microbiologist, passed away when his daughter-in-law was in her first semester of the DNP program in fall 2019.

“I miss him so much. I know he would be so proud of me,” Calderon said. “I had to finish strong to honor him.”