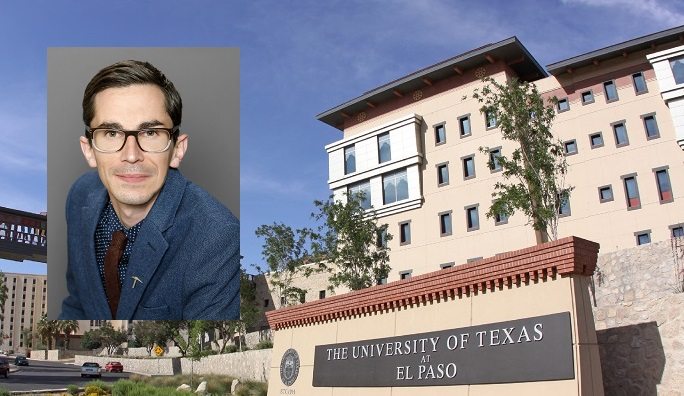 An assistant professor at The University of Texas at El Paso is the campus’ first-ever recipient of the Sloan Research Fellowship.

Skye Fortier, Ph.D., of UTEP’s Department of Chemistry and Biochemistry, was named one of 126 winners of the top prize of the Alfred P. Sloan Foundation on Thursday. The fellowship is a highly regarded honor that recognizes early-career scholars whose achievements mark them as the next generation of scientific leaders.

The list was announced Thursday, February 15, with a full-page advertisement in the New York Times. Fortier will receive $60,000 to further his research in synthetic and organic chemistry.

“Being named a Sloan Research Fellow is a tremendous honor,” said Robert Kirken, Ph.D., dean of the College of Science. “For Dr. Fortier, this is a testament to his capabilities as a scientist. This award means his work has stood out from among the top researchers in the country. The Sloan Foundation considers him to have the potential to become the next great leader in his field. That is exciting news for him and an amazing opportunity for UTEP.”

Candidates must be nominated by their fellow scientists and winning fellows are selected by independent panels of senior scholars on the basis of each candidate’s independent research accomplishments, creativity and future potential.

Fortier said that the recognition would not have been possible if not for his student researchers.

“Even though this is the research program that I developed, none of it would ever be executed without the students that are in my laboratory,” he said. “We, of course, have great faculty, but we also have phenomenal students. They’re the ones executing this research; they’re the ones doing the hard work. Together I think we make a really powerful team.”

Fortier said the money he will receive as a Sloan recipient will facilitate the research activities he is conducting to make metal-containing compounds. Fortier said he hopes to develop methods to create organo-metal molecules for new types of chemical reactions and new, low-cost, easy-to-manage catalysts that can be applied to various facets of science.

Fortier was nominated for the prize by associate professor Keith Pannell, Ph.D., his colleague in the Department of Chemistry and Biochemistry who was once his research mentor. Fortier worked in Pannell’s laboratory when he was an undergraduate student at UTEP in the early 2000s.

“It was clear to me from the first time I met him that he was an energetic young man,” Pannell said. “Skye was someone who could work, think and live inside the box as well as outside the box. That sort of creativity is rare. It is absolutely beautiful to see his success come to fruition.”