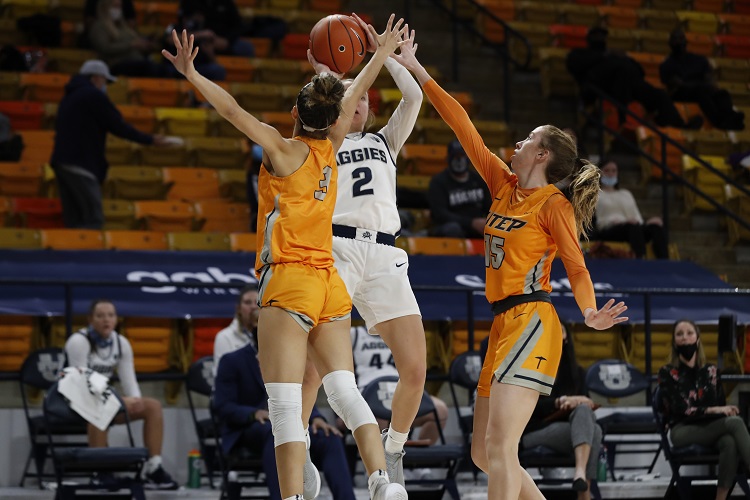 LOGAN, Utah – UTEP women’s basketball (3-1, 0-0 C-USA) overcame two double-digit deficits, but it was not enough to seal another fourth quarter win as they fell to Utah State (2-3, 0-0 Mountain West), 68-65, Sunday afternoon at the Dee Glen Smith Spectrum in Logan, Utah.

The Aggie win stretched the margin of their all-time series with the Miners to 6-0.

Sophomore guard Katia Gallegos found sophomore forward Tatyana Modawar with 44 seconds left in the fourth quarter for her fifth and final assist of the night, leading to a go-ahead 3-pointer, 64-63. Modawar’s shot erased the 14-point lead set by the Aggies at the beginning of the third quarter.

However, similar to when UTEP fought back with a 9-0 run after Utah State went up 11 in the second quarter, the Aggies snatched the lead just one possession later.

A layup from guard Kamalu Kamakawiwo’ole put Utah State up 65-64 with 30 seconds left.

Utah State jumped out to an 11-3 lead in the opening minutes of the first period, making two of its four first-quarter 3-pointers in that span. The Aggies were 7-15 shooting from beyond the arc in the first half compared to the Miners’ 3-11.

Utah State ended the first quarter with a 25-14 lead shooting at a 60 percent clip from the field while the Miners shot just 35 percent.

The Miners came roaring back in the second period outscoring the Aggies, 16-4, until the five-minute mark. Gallegos, senior forward DejaNae Roebuck and sophomore guard Avery Crouse each picked Utah State for a steal in that span. The Miners forced 23 total turnovers compared to the Aggies’ 13 which translated into 24 points. Junior guard Destiny Thurman made her UTEP debut in the second quarter scoring seven of her total 14 points in the period.

Down the stretch, Thurman came up clutch with two back-to-back 3-pointers halfway through the fourth quarter, the second of which tied the game, 58-58, for the first time since the second quarter.

Gallegos ended the night with a game-high 19 points, six rebounds and five assists. Modawar pulled down a team-high seven rebounds and scored eight points of her own. Roebuck was third on the team in scoring with 9 points and swatted three blocks after the Miners only recorded one block through the first three games.

The Miners entered the game with a 9.7 rebounding margin advantage in their three previous games but were outrebounded 49-33 by the Aggies.

Next up, UTEP faces up-and-coming Northern Arizona (3-2) program in its final non-conference game of the season at 6 p.m. MT Thursday, December17.