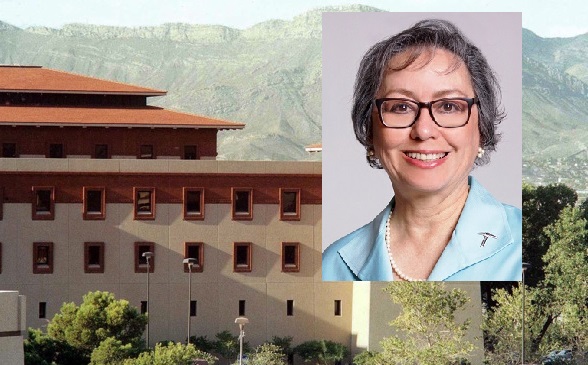 “I am humbled to receive an award that is named in honor of Alfredo de Los Santos,” Gates said. “Dr. de Los Santos’ legacy, which was centered on service to students and community, inspires and guides my efforts in higher education.” | Photo courtesy UTEP

Ann Gates, Ph.D., vice provost at The University of Texas at El Paso (UTEP), has been awarded the 2021 Alfredo de Los Santos Jr. Distinguished Leadership Award – a prestigious honor by the American Association of Hispanics in Higher Education (AAHHE).

“AAHHE plays a critical role in leading diversification of the academy,” said John Wiebe, Ph.D., UTEP provost and vice president for academic affairs. “We are grateful to the organization and to Dr. Gates for putting into action their beliefs that higher education should be more effective in meeting the needs of the changing demographics of our nation.”

Gates’ nomination was prepared by Provost Wiebe, who said his colleague “has altered the course of higher education for the better for Hispanic students and faculty at UTEP and far beyond. She is a leader and mentor of leaders; I can think of no one more deserving of this recognition than her.”

“I am humbled to receive an award that is named in honor of Alfredo de Los Santos,” Gates said. “Dr. de Los Santos’ legacy, which was centered on service to students and community, inspires and guides my efforts in higher education.”

In her current role, Gates leads efforts in academic affairs to promote diversity, equity and inclusion among faculty, and coordinates a working group of faculty, staff and students to define and enact the construct of “Hispanic servingness” at UTEP. She oversees recruitment, hiring, retention and promotion of the faculty, of whom 39.5% identify as Hispanic, the largest percentage of any R1 top tier research university.

Formerly the chair of the Department of Computer Science, Gates is the director and lead principal investigator of the NSF-funded Cyber-Share Center of Excellence at UTEP, nationally known for the study of collaborative science and engineering.

Her work in this role has been instrumental in providing a strong, sustainable foundation at UTEP to advance interdisciplinary research and education, and develop and apply models of team-based, cooperative learning, and knowledge integration and management. Her leadership of this program led to the creation of UTEP’s research database (Expertise), Communities of Practice, and the development of the ENGAGE database, which evaluates student engagement in high-impact practices.

Gates is a founding member and lead of the Computing Alliance of Hispanic Serving Institutions (CAHSI), a nationally recognized network that focuses on the recruitment, retention, mentorship and advancement of Hispanics in computing.

CAHSI has grown under her leadership to more than 60 colleges, universities and organizations from the public and private sector. Because of its evidence-based practices, CAHSI has been nationally recognized by the White House Initiative on Educational Excellence for Hispanics as a “Bright Spot in Hispanic Education” and has been added to the “What Works” database by Excelencia in Education.

Also at the national level, Gates serves on the National Academies of Sciences, Engineering and Medicine (NASEM) Roundtable called “Systemic Change in Undergraduate STEM Education.” The aim of this working group is to organize, coordinate and provide logistical support for a national effort to use systems approaches to address issues in undergraduate STEM education. She also serves on the NASEM Women of Color in Technology Study Group.

Recently, she was elected to be one of two computer science representatives for the American Association for the Advancement of Science (AAAS) SEA Change Departmental Awards Framework Drafting Group. SEA Change implements a proven self-assessment framework to effect sustainable change with regard to diversity, equity and inclusion at institutions of higher education.

Most recently, Gates was featured in a PBS documentary titled, “At Your Fingertips.” The project is funded by the NSF and provides inspiration and mentorship to young adults aspiring to become professionals in the field of computer science.

Gates has been recognized for her leadership with many awards, including the 2015 Great Minds in STEM Education award; the Computing Research Association 2015 A. Nico Habermann Award; the 2010 Anita Borg Institute Social Impact Award; and the 2009 Richard A. Tapia Achievement Award for Scientific Scholarship, Civic Science, and Diversifying Computing. She was named to Hispanic Business Magazine’s 100 Influential Hispanics in 2006 for her work on the Affinity Research Group model.

Gates will accept the award March 2 during the 2021 AAHHE National Conference.