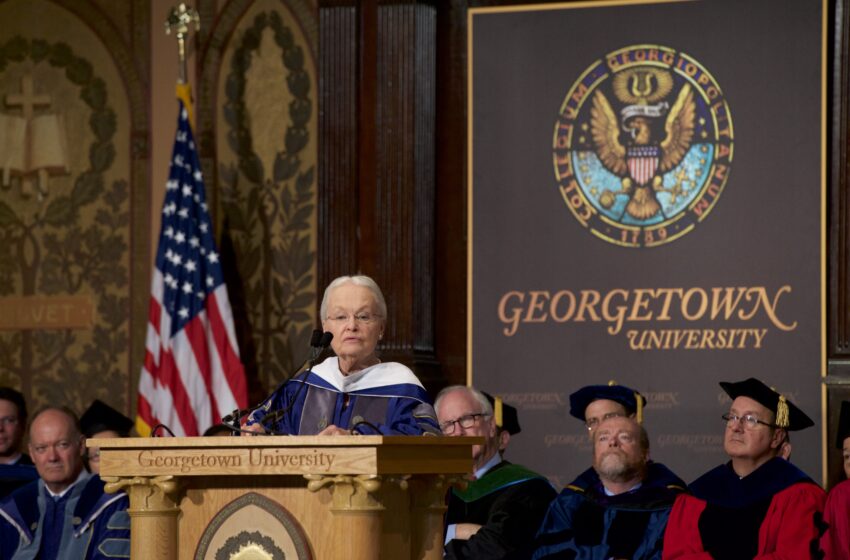 Georgetown uses this ceremony to celebrate those faculty members who recently have received tenure or promotion.

In his introduction, Georgetown University President John J. DeGioia, Ph.D., referred to President Natalicio as “one of the most impactful leaders in higher education over the past four decades, someone who has changed the landscape of higher education in our nation.”

He continued: “Under her leadership, UTEP has provided a model for expanding the communities that have access to higher education while providing a deep context for research and teaching.”

President Natalicio gave the audience brief descriptions of El Paso and UTEP before sharing stories of the high-achieving UTEP students who thrive on the U.S.-Mexico border, and the success they see as a result of the University’s access and excellence mission.

“By challenging traditional policies, procedures and metrics, UTEP has been successful in creating amazing opportunities for large numbers of students who at another place or time might not have had access to them,” she said.  President Natalicio received a standing ovation after her address in Gaston Hall.

This was the second time President Natalicio made an address at Georgetown. She previously spoke at the university’s 2011 commencement ceremony for Georgetown’s School of Continuing Studies. She was awarded an honorary Doctor of Humane Letters that year.

In May 2017, President Natalicio delivered two commencement addresses. One at her alma mater, Saint Louis University in St. Louis, Missouri, where she received an honorary Doctor of Science degree after her speech.

Northeastern University also conferred an honorary Doctor of Humane Letters degree on President Natalicio after she gave an address at the institution’s 115th commencement ceremony in Boston.