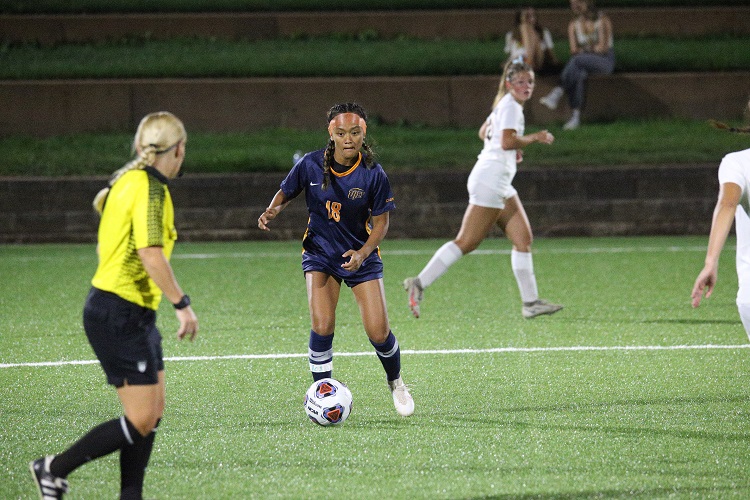 DAVIS, California – After falling behind 2-0 in the first half, the UTEP soccer team (0-4) battled back to pull even only to have homestanding UC Davis (2-2) regain the lead late in the match in a narrow 3-2 road setback Sunday afternoon.

The Aggies jumped out to a 2-0 lead behind goals from Emma Vane (3’) and Emma Hasco (38’), but the Miners would rally. Freshman Sheyliene Patolo’s first career goal (43’) cut the deficit in half heading to the locker room.

UTEP found the equalizer with senior Jackie Soto’s first tally (79’) of the season, but two minutes later Vane put away a ball off a crazy deflection for the match winner. Jojo Ngongo was credited with an assist on Patolo’s goal, and Vic Bohdan set up Soto’s strike.

The Miners finished with 12 shots in the contest, including four on target. UTEP also earned a pair of corner kicks. Freshman goalkeeper Luisa Palmen delivered a career-high five saves while playing all 90 minutes for the first time this season. It marked UTEP’s fourth loss by one goal this season.

“I’m proud of the girls for fighting back after going down 2-0,” UTEP head coach Kathryn Balogun said. “These losses by one goal are tough, especially when they take a crazy deflection. We will continue to believe in who we are and improve our preparation as we will face another tough away weekend on a short week.”

UTEP pressured early, with a Bohdan chance flying just over the net 39 ticks into the contest. After UTEP regained possession, it earned a corner kick. Soto set up Emerson Kidd, but the shot went wide. UC Davis then got things going offensively after a cross into the box was one touched home past Palmen by Vane (3’).

After two saves in two minutes by Palmen to keep the score at 1-0, UTEP went in search of the equalizer. Bohdan let loose a shot that was saved by Nicki Rucki in the 14th minute.

UC Davis extended its lead to 2-0 after Hasco elevated a shot from point-blank range over Palmen in the 38th minute. Rather than hang their head, the Miners went back to work. They possessed from Palmen and methodically worked the ball to Ngongo. Her shot was blocked, but Patolo secured the rebound and used a curving shot to best a diving Ricki while cutting the Aggies’ lead in half at 2-1.

UTEP had a chance with 16 seconds to play in the period but Ngongo’s shot was turned away, and this time there was no one there to follow.

Ten minutes into the second half there was a cross toward Kam Fisher. She tried to one time it home, but it whistled wide. She had another chance in the 61st minute, but it went over the bar. Two minutes later Palmen came up with her fifth save of the match, denying Leslie Fregoso’s header.

With time becoming a factor, a ball got played into space toward Bohdan. She streaked up the right wing and crossed it into the area to Soto, who had timed the run perfectly. She used a clinical finish to best Rucki and pull UTEP even at two in the 79th minute.

Unfortunately it would not last with just two minutes late Vane scoring off a crazy deflection for her second goal of the game. The Miners generated a couple of late chances, but both were wiped out on offside calls.

UTEP will close out a stretch of four consecutive matches away from home by challenging UIW (Sept. 3) and SEC power Texas A&M (Sept. 5).