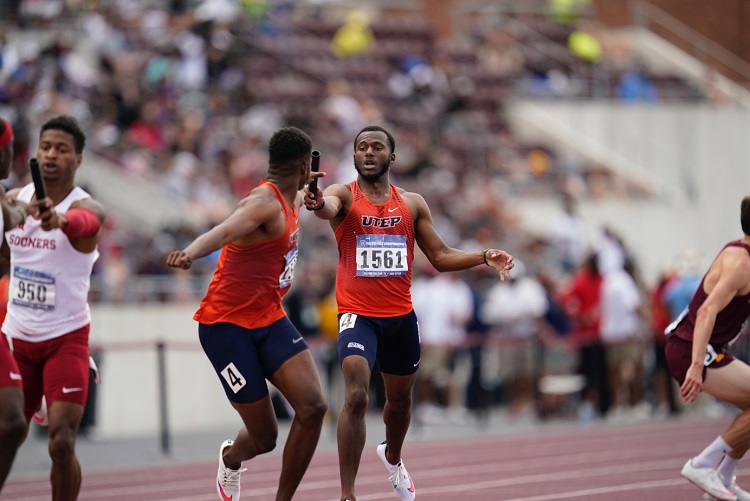 The events were rescheduled for Saturday after inclement weather postponed the remainder of Friday’s competition. Bailey and the 4×400 team will join Aleks Hristov to Eugene, who advanced to nationals on Friday before the storm

Bailey scorched the competition in the second heat, clocking in a 45.31 for a first-place finish. Overall, Bailey finished third behind Texas A&M’s Bryce Deadmon (44.57) and BYU’s Michael Bluth (45.13). Bailey, who’s making his first trip to Eugene, was named All-America second team in 2019 at Mike A. Myers Stadium in Austin, Texas. He finished in 13th in the semifinals that season.

Freshmen Hill, Powell and Hewitt, and senior Bailey turned in a season-best time 3:04.60 in the relay. The Miners finished in second place in the third heat, and seventh overall.

Shakeem Smith had an unfortunate false start in the 110m hurdles quarterfinals, and came up short in the 400m hurdles, placing 13th with a time of 50.40.

“Shakeem unfortunately had to adjust his steps to the last hurdle in his 400-hurdle quarterfinal, halting his momentum and he missed qualifying to Eugene by 15 seconds,” Laaksonen said. “Obviously, we are proud of how all our student-athletes competed here. As a team, we qualified more athletes than were expected based on NCAA’s event specific seasonal descending order lists. No regrets and happy to return back home tomorrow for the final tapering before traveling to Eugene on June 6.”

Powell saw action in the 200m quarterfinals, finishing 19th overall. However, he’s part of a young core group of Miners in the program looking to a bright future.