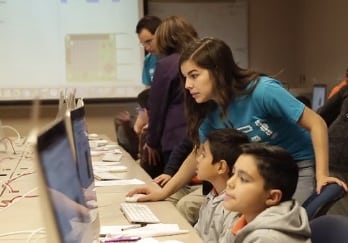 The University of Texas at El Paso’s Tech-E Outreach Program was recognized by Campus Technology magazine as one the country’s best in the Teaching and Learning category.

Tech-E, short for Technology Exploration, invites students from local school districts to visit the University to get hands-on training in computer languages, programming, gaming and more.

“This is an important recognition of UTEP’s success at exposing these elementary school students to computer technology at an early age, which will open up to them opportunities for success that otherwise wouldn’t be possible and help to grow the U.S. technical workforce,” said Stephen Riter, Ph.D., vice president for information resources and planning.

Michael Pitcher, the director of UTEP’s Academic Technologies, said the recognition has opened his eyes to the program’s reach.

“I don’t think we really realized how much of an impact we were having before we got this award,” he said. “We had to step back and take a look at what we were doing.”

The team that includes Pitcher and faculty and staff members Pedro Espinoza, Hector Lugo, Hugo Gomez, Randy Anaya and Herminia Hemmitt have grown the Tech-E Outreach program from a one-time summer camp that reached 350 elementary and middle school students in 2015 into a popular program that will attract 60,000 children this fall.

“We knew we had big numbers but we never thought we would have 60,000 kids going through the program this upcoming year,” Pitcher said. “Comparing that to what others are doing at a national level, UTEP and Tech-E are pushing pretty good numbers.”

After a nomination process that brought submissions from across the country, 14 honorees were selected in five categories.

In its 14th year, the Campus Technology Impact Awards recognize colleges and universities that are making an extraordinary impact with technology on campus, doing important work in the service of teaching, learning, administration and operations. These projects, both cutting-edge and well established, have made their mark on campus and on the higher education community at large.

Starting its third year, the Tech-E program will have classes for elementary to high school students from the El Paso, Clint, San Elizario and Tornillo school districts almost every Friday during the fall and spring semesters.

“In three years, we went from serving 350 to 700 to 10,000 and now to 60,000 students, Pitcher said. “We want to shoot for 100,000, why not? Our long-term vision is to do what we’re calling Kinder to Industry, where we have industry partners come in and tell us what they do in the real world. We then want to start to teach the same skills to kids in kinder and follow through with them until high school graduation. If we can do that, we can really be a driving force in our region.”

About 30 UTEP students from engineering, computer science, education and other fields are also part of the Tech-E team.

“For us, the award inspires us to do more,” Pitcher said. “Our students and staff want to use our tech skills as an outreach program to kids who are really interested in technology but their parents might not be able to send them to computer science camps or engineering camp. We want the kids to come in and discover their full potential for themselves.”