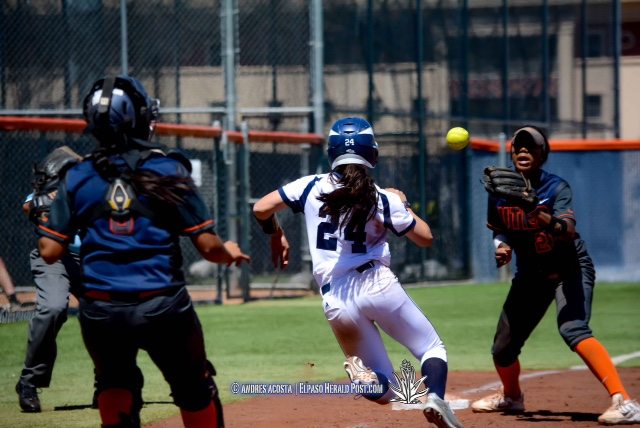 UTEP tied the game 4-4 after a Kiki Pepi two-run double, but UTSA answered with six runs in the seventh to claim a 10-5 victory on a clear and sunny Sunday at the Helen of Troy Softball Field.

The contest was back-and-forth as each squad would come up with a big hit, but the Miners didn’t come up with enough clutch hits, as 10 runners were left on base throughout the afternoon.

“We didn’t take care of business when we needed to,” third-year head coach Tobin Echo-Hawk said. “We hit the ball pretty hard, we just hit them right at them. Some days you get the breaks, some days you don’t.”

UTEP found itself down again, as UTSA scored a pair of runs in the third inning. But the Miners put up a run in the bottom half on a Danielle Pearson sac-fly to left, scoring Kaitlin Ryder.

The Roadrunners answered with another run in the top fourth on a Bailee Baldwin double that plated Chelsea Thomas. Again, the Miners would cut the deficit when Ryder connected on a sac-fly to right field, scoring pinch runner Morgan Rasmason to make the score 3-2.

Tess Soefji hit her sixth home run of the season in the sixth inning, putting her team up 4-2.

But the relentless Miners would have an answer for that.

Cortney Smith reached on a hit by pitch with one out, while Courtney Clayton followed with a single. With two outs and Pepi at the plate, she hit a ball high in foul territory to the left of home plate on a 2-2 pitch. The catcher, Soefji, lost the ball in the sun to keep the inning alive. Pepi then connected on a ball that went high in the air and dropped in a sweet spot between a pair of outfielders in shallow left center.

Pepi got a double out of it, as Smith and Clayton crossed the dish, but was thrown out at third on an 8-2-5 putout.

After UTEP’s second fielding miscue of the afternoon with a runner on, the Roadrunners notched a pair of RBI on back-to-back hits and Madison Kinley put the game out of reach with a traditional grand slam over right.

Taylor Sargent led off the bottom seventh with a solo home run, her second of the season. Kawehiokalani Netane and Linda Garcia recorded back-to-back two-out singles, but Lizzy Fox (6-7) struck out the next batter to end the contest.

UTEP will travel to Austin, Texas to take on Texas in a doubleheader on April 5 at 4:30 p.m. CT. The Miners will have their bye week after the two-game series traveling to Murfreesboro to take on Middle Tennessee (April 16-17).

The Miners-Longhorns game one will be televised on the Longhorn network; game two will be replayed later in the evening (11 p.m. MT) due to the Longhorn Network televising Texas baseball at 7 p.m. CT.