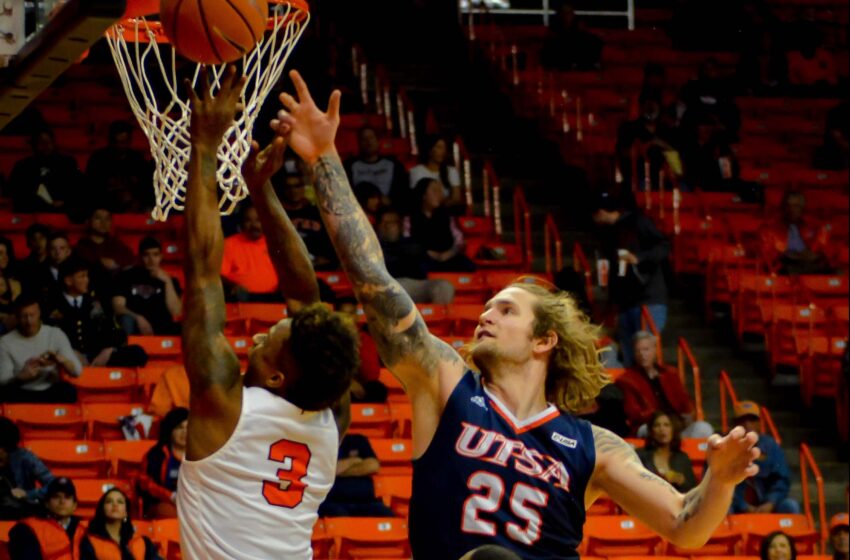 The UTEP Miners went toe-to-toe with red-hot UTSA on Saturday at the Don Haskins Center. But on a night where neither team could find its aim at the free throw line, the Miners missed 18 foul shots and dropped a 63-59 decision to the Roadrunners.

“You can point to so many things,” UTEP Interim Head Coach Phil Johnson said. “I’m proud that we shot 34 free throws. But making 16, if you make five extra free throws, you win the game. And that was part of the deal. We got in the bonus real early, I think with 14 minutes to go, maybe as quick as we have all season. And I was really happy, so I said ‘Let’s go get fouled.’ And we did. But you’ve got to make them.”

It was anybody’s ball game with 2:18 left and the Roadrunners leading 57-53, but UTSA was just a little bit better down the stretch.

“With two minutes to go I said the team that is tougher, the team that doesn’t foul, and doesn’t turn it over will go win this game,” Johnson said. “We turned it over and we fouled them.”

After Trey Touchet’s layup made it a four-point game, the Roadrunners scored the next four points – including a dagger of a three-pointer from Deon Lyle with 55 seconds left. Lyle scored 18 points with five threes, including four in the second half.

The Miners still had life when Isiah Osborne was fouled on a three-point attempt with nine seconds left. He made two of three to cut it to two (61-59), but Giovanni De Nicolao put it away on two free throws of his own with five seconds remaining.

UTEP had its biggest lead of the game, 21-15, on a three-pointer by Tirus Smith with 10:36 left in the first half. But the Miners went cold the remainder of the period, getting outscored 16-7. UTEP missed nine of its last 10 shots to close out the half.

The Miners fell behind by six (40-34) early in the second half. UTEP battled back, and when Osborne hit a three with 10:57 to play, the Miners led 48-46. Similar to the first half, UTEP endured another long dry spell and scored three points over the next eight and a half minutes. By the time they snapped out of their funk, they were down 57-51 and under three minutes remained.

“They made some big shots down the stretch,” Johnson said. “We got caught in a couple of switches, we started switching screen and roll and we didn’t do it and we paid a heavy price from Lyle. He knocks down five threes, he came in and just drilled us. I thought we had some guys compete tonight, I really did. We didn’t play particularly well.”

The Miners employed their 15th lineup of the season with Matt Willms starting for the first time in three weeks, and Evan Gilyard starting with Kobe Magee for the first time. Willms played 24 minutes and contributed 12 points with seven rebounds. Tirus Smith returned after missing six games with a knee injury and played five first-half minutes, scoring five points.

“It was good to have Matt back,” Johnson said. “Tirus gave us five minutes and it wasn’t too bad given that he has been out for three weeks. I think we’ll get better with those two guys back in the lineup and playing as they get back in shape.”

Omega Harris came off the bench for the first time in 57 games and was held scoreless for the first time since Feb. 28, 2015 at Southern Miss. He had scored in his previous 83 games. Harris took only three shots. Paul Thomas picked up his first double-double of the season with 11 points and 11 rebounds, and San Antonio native Magee added 11 points.

“That’s a lot of threes,” Johnson said. “Half of our shots are threes again and I don’t like that. Some of them were late, I’d say eight or 10 were in the last minute or half because we were down three so we launched a few. We had to. But still, that’s too many.”

UTEP was outrebounded 48-35 as Nick Allen snared nine boards for the Roadrunners.

“Their rebounding total was a result of our poor free throw shooting and our poor three-point shooting,” Johnson said.

The Miners will be on the road for four of their last six games, starting on Thursday (Feb. 15) at Charlotte. Tip-off is 5 p.m. MT and the game can be seen on ESPN3.

“Our goal is to get in the [Conference USA] tournament,” Johnson said. “It’s not out of reach at all. This was a big game to try to win and help our cause. But we’ve got six left and they’ll all be tough games. Four of them are on the road, and two are tough home games. So it won’t be easy by any stretch. But hopefully we have enough fight in us left to go make that run to get in the tournament.”