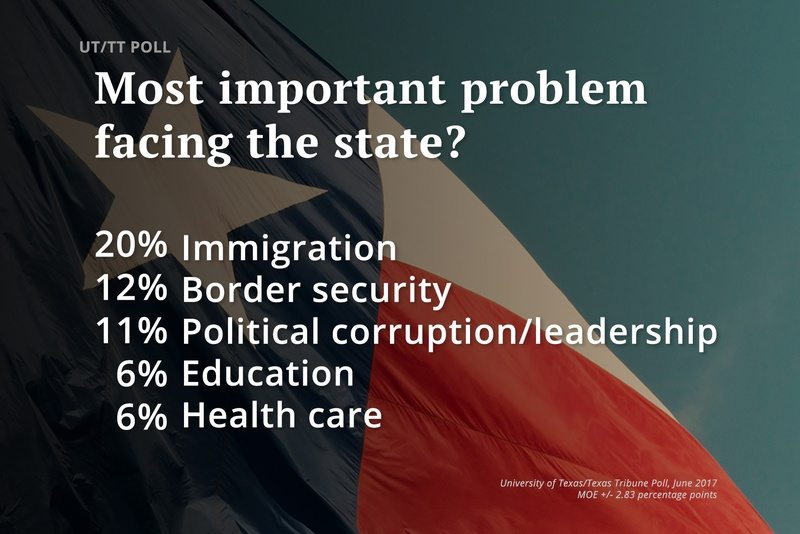 Immigration and border security continue to top Texas voters’ lists of most important problems, according to the latest University of Texas/Texas Tribune Poll.

About one-third of the voters surveyed listed one of those issues as their top concern, leaving issues like political corruption/leadership, education and health care in the dust.

And a long list of issues from property rights to the environment, transportation to taxes, barely registered.

“Only 6 percent say unemployment or jobs are top of mind,” said Daron Shaw, co-director of the poll and a professor of government at the University of Texas at Austin.

He added that kind of rating is often good for the powers that be.

“People are coming to the idea that the Texas economy is good and the national economy is getting better. That, I think is good for the party in power, he said.

Some other responses, however, show “a taste for leadership and reform,” Shaw said.

Voters’ views of the biggest issues facing the country were somewhat different. More than a quarter listed either political corruption/leadership or national security/terrorism as the most important problem facing the United States, followed by the economy, immigration and health care.

Voters’ relative comfort with the economy shows up in their views of how things are going nationally, for the state and for their families. In all three cases, more voters see improvement over the past year than see things getting worse. More than half said their own economic situation is about the same as it was a year ago. But 42 percent think the national economy is better, and 34 percent think the state economy has improved.

The University of Texas/Texas Tribune internet survey of 1,200 registered voters was conducted from June 2 to June 11 and has an overall margin of error of +/- 2.83 percentage points. Numbers in charts might not add up to 100 percent because of rounding.

This is one of several stories on the latest University of Texas/Texas Tribune Poll. Earlier: Texans on President Trump and the Russia inquiries. Coming next week: Texans’ views on issues.