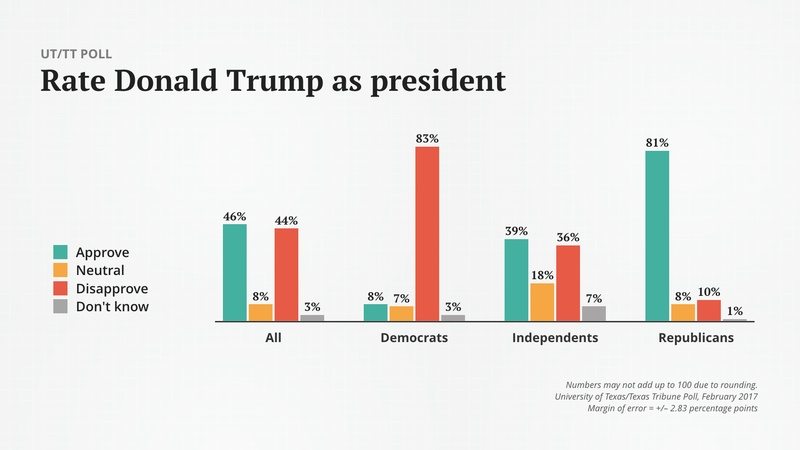 Texas Republicans have rallied strongly around President Donald Trump in the first weeks of his administration. Texas Democrats had just as strong a reaction — in the other direction.

In his second month in office, President Donald Trump is getting overwhelmingly good grades on his job performance from the state’s Republicans, according to the latest University of Texas/Texas Tribune Poll.

Trump is popular enough to cast positive light on Russian President Vladimir Putin, a world figure who turns out to be markedly more unpopular with Texas Democrats than with Texas Republicans.

“He looks good,” said Jim Henson, director of the Texas Politics Project at the University of Texas at Austin and co-director of the poll. “Republicans as a group were tentative in their embrace of Donald Trump during the election campaign. They are hugging him now. His favorability rating among Texas Republicans increased 21 points between October and February.”

Likewise, 81 percent of Texas Republicans have a favorable opinion of Trump, while 12 percent have an unfavorable impression of the president.

As you might expect, Texas Democrats fiercely disagree in what amounts to an almost equal but opposite reaction to the Republicans: 83 percent of Texas Democrats disapprove of the job Trump has done as president, 76 percent of them “strongly.” And 85 percent of Democrats said they have an unfavorable opinion of the new chief executive.

“If you’re a Republican, even if you don’t like the guy, well, there’s the Supreme Court and the repudiation of a bunch of smug ideologues [on the left]; this isn’t the worst thing in the world,” said Daron Shaw, co-director of the poll and a professor at UT-Austin. “The reaction of the left — the resistance — probably reinforces that.”

Independents were split almost evenly on both questions in the poll, with 39 percent approving and 36 disapproving of the job Trump is doing; 42 percent saying they have a favorable impression of the president, while 45 percent have an unfavorable one.

Overall, 45 percent of Texans have a favorable impression of Trump and 46 percent have an unfavorable one.

Putin seems to be benefiting from Trump’s attention and from the American president’s popularity.

“On the surface, the topline number looks like you would expect: Vladimir Putin is not a popular figure with Texans,” Henson said. “But the details testify to the powerful influence of presidential signaling on his partisans. The president of Russia’s negatives are 28 points higher among Democrats than they are among Republicans, full stop.”

“It’s not like they’re loving Putin,” Shaw said. “You’re basically getting 50 percent of Republicans saying, ‘No, the guy is a thug.’ Which means 50 percent are saying he’s not a thug.

“This speaks to the Trump halo effect,” he added. “Putin seems to prefer Trump, and I prefer Trump, therefore Putin can’t be all bad. But the notion that there’s an openness to cozy up to Russia, I don’t think so.”

“I don’t think that people’s impression of Donald Trump has changed all that much,” Henson said. “But these numbers are a testament to the role of the president as a figurehead and the power of partisanship.”

The University of Texas/Texas Tribune internet survey of 1,200 registered voters was conducted from Feb. 3 to Feb. 10 and has an overall margin of error of +/- 2.83 percentage points. Numbers in charts might not add up to 100 percent because of rounding.

This is one of several stories on the latest University of Texas/Texas Tribune Poll. Also today: Texans on the economy and the direction of the country and state. Coming Tuesday: Texans’ views on immigration, cultural issues and health care. 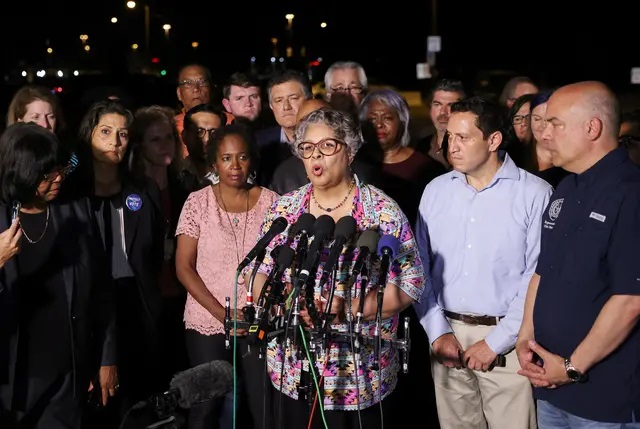