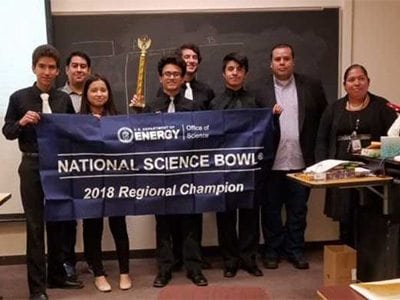 The VVECHS Spartans won the El Paso Regional NSB competition, defeating Northwest ECHS 42-0 in the finals.  This marks the fifth year in a row for the Spartans, as they are now headed to the national competition in Washington D.C. in April.

The National Science Bowl, sponsored by the U.S. Department of Energy, is a national academic competition that tests students’ knowledge in all areas of science and math.

Teams from diverse backgrounds face-off in a fast-paced question and answer format, testing on a range of science disciplines including biology, chemistry, Earth science, physics, energy, and math.

Each year, the National Science Bowl attracts over 17,000 students nationwide, challenging them to expand their knowledge of science and mathematics and their understanding of global energy and environmental challenges.