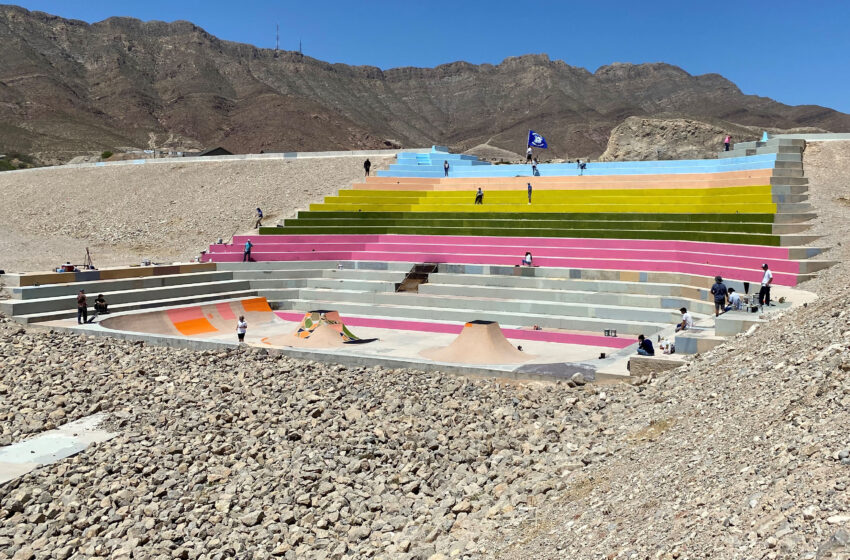 The Van Buren Dam in Central El Paso has a fresh look thanks to an Earth Day clean-up event organized by City Rep. Alexsandra Annello.

“We’ve received a lot of complaints about this from people in the area,” said Annello, adding that she wanted to partner with neighborhood skateboarders to improve the park. “We really wanted to bring more attention to this area. We want to clean it up and remind people that it’s here for their use and they should feel safe and proud of it,” she said.

Over 20 volunteers spent their Saturday morning cleaning trash and debris from the dam – known to the surrounding area as The Green Bowl thanks to its former dark green color scheme. They took up paint brushes to give the dam’s steps a much-needed rejuvenation.

The stormwater dam doubles as a community skate park, but its secluded location provides cover for vandals to graffiti the concrete steps and walls, and for people to toss bottles and other trash into the basin.

Sullivan, along with other skateboarders, painted murals and geometric patterns across the existing gray concrete ramps and walls of the skatepark, which frequently offered a blank canvas for graffiti.

“For us it’s great, it makes the whole thing skateable, and it’s fun,” said Sullivan.

Abraham Monteros, president of Chivas Town Neighborhood Association and a teacher at Bowie High School, agreed that the skate park was in need of improvements.

“I think it was in need of a touch up, in need of some sprucing up,” he said. “Also, as a teacher, I thought this was a great project for my students to collaborate on with the community.”

City Rep. Cassandra Hernandez also took the opportunity to celebrate Earth Day with a cleanup event at the Vocational Stormwater Pond in her district.

“A neighborhood cleanup not only serves the purpose of beautification but serves as a reminder than when public and private organizations along with residents come together, it can be a fruitful event for the community and the environment,” Hernandez said.

Nearly fifty people showed up to clear out trash, old tires, and discarded furniture from the Vocational Pond near Riverside High School, where illegal dumping is a frequent complaint from residents of the neighborhood.

“Having the community pitch in on this cleanup not only allows the pond to serve its purpose properly but also keeps the landscape clear and environmentally friendly,” she added.

EPWater Stormwater Manager Enrique Ochoa agrees these cleanups are important. He says they beautify the neighborhood, and they help with flood control too.

“The ponds and dams can hold more stormwater when they aren’t filled with trash, keeping people and properties safe from flooding,” Ochoa said.