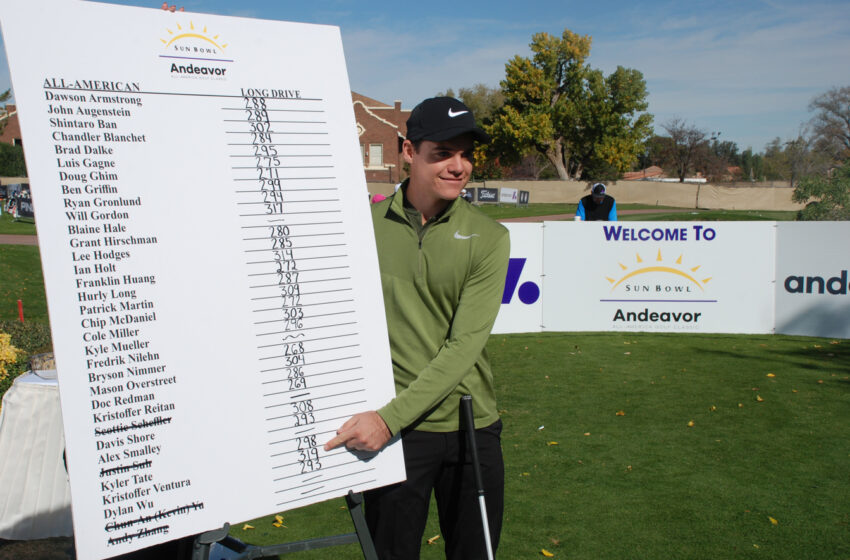 Oklahoma State senior Kristoffer Ventura swept both events after finishing second at last year’s long drive contest. He won the Titleist Long Drive Contest with a 319 yard blast down the fairway on a windy day in the Borderland.

The PING Putting Contest came down to a three-way playoff between Ventura, North Carolina senior Ben Griffin, and Texas freshman Kristoffer Reitan. Ventura won the sudden death playoff after sinking the first hole of the putting course from a saddle.

“I wasn’t expecting to sweep these events,” Ventura said, “It was fun.”

This is Ventura’s second year competing in the Golf Classic. He finished in third place last year, four strokes behind champion Sam Burns of LSU.

“One of my goals after I got back from this event last year, was I wanted to play one last time here before I finish college,” Ventura said. “Last year I played pretty good so if I can improve on that I’ll be pretty happy.”

The Sun Bowl Andeavor All-America Golf Classic continues at the El Paso Country Club with two rounds of golf set for Monday, Nov. 20 starting at 8 a.m. (MT). The final round is set for 8 a.m. on Tuesday, Nov. 21.

Some of golf’s biggest names have traveled to El Paso to participate in the tournament including Tiger Woods, Dustin Johnson, Jordan Spieth and Phil Mickelson. Alumni of the College All-America Golf Classic have combined to win 52 golf majors and have earned over

To be eligible for competition, student-athletes must have been named an All-American during the previous year. The U.S. Amateur Champion or Runner Up also qualifies if they still have collegiate eligibility.