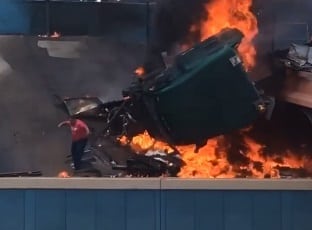 A tractor-trailer wreck in the Westbound lanes of Interstate 10 in Downtown El Paso has shutdown traffic in both directions, resulting in miles-long backups.

The wreck happened shortly before 1 p.m. Thursday afternoon, as the driver of the westbound semi-truck somehow lost control of his rig, sending it careening up the embankment of the freeway.  The truck – seemingly traveling at full-speed – struck the utility overpass between Mesa and Stanton, dislodging the concrete surrounds and water pipe, then bursting into flames.

As freeway motorists and customers of the Howdy’s gas station at Stanton and Yandell above the wreck looked on, the driver crawled out of the damaged cab via the busted windshield, just as the ignited fuel spread beneath the wreckage.

According to El Paso Fire Department officials, the driver was transported to a local hospital, and no other injuries were reported.  The identity of the driver was not released.

As a result of the damage to the utility overpass, Texas Department of Transportation (TxDoT) officials closed down the freeway in both directions, to assess the damage.

Of the damage, via a tweet, TxDoT officials added: “There is an @EPWater line that is already leaking; a @TexasGasService line that is being checked for activity; a telephone communications line and there is an @ElPasoElectric line, no one affected by outage now.”

For their part, officials with El Paso Water report that their crews are “responding to a large water main that was impacted by the truck crash above I-10. Crews are closing off valves to stop the leaking main. Service will not be interrupted, but expect low pressure north of Montana between Prospect and Campbell.”