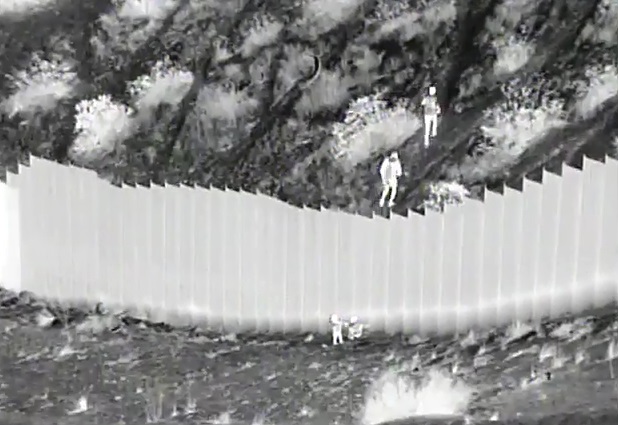 “I’m appalled by the way these smugglers viciously dropped innocent children from a 14-foot border barrier last night. If not for the vigilance of our Agents using mobile technology, these two tender-aged siblings would have been exposed to the harsh elements of desert environment for hours,” stated El Paso Sector Chief Patrol Agent Gloria I. Chavez.

“We are currently working with our law enforcement partners in Mexico and attempting to identify these ruthless human smugglers so as to hold them accountable to the fullest extent of the law.”

The video shows both children landing on the ground, and the two smugglers running away from the fence, with both  little girls on the north side of the international boundary line.

“The camera operator alerted Santa Teresa agents and directed them to the remote location of the incident,” officials shared. “Responding agents found the three-year-old and five-year-old Ecuadoran children and rendered aid to them.”

The two toddlers are sisters and both were alert when agents made contact with them, and were transported to the Santa Teresa Border Patrol Station for evaluation by medical personnel.  Once there, agents contacted Emergency Medical Services and the toddlers were transported to a local hospital as a precaution.

Officials say the two girls were medically cleared and now are in Border Patrol temporary holding pending placement by Health and Human Services.