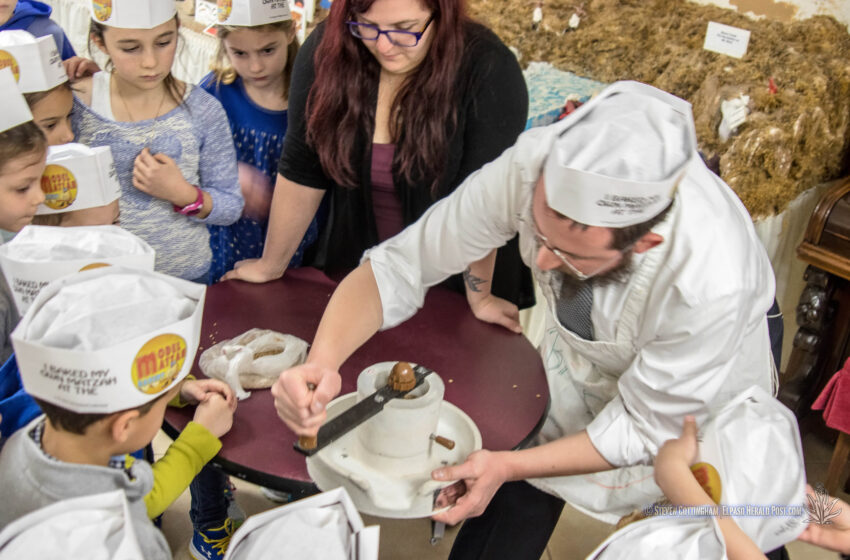 On Monday, a rambunctious group of children, all attending Camp Gan Israel – Spring Camp, at Chabad Lubavitch of El Paso got a taste of tradition, a taste of Passover, and hands-on experience in making matzah at the Model Matzah Bakery.

The bakery was a way for children to learn how to make matzah, to hear the story of the Passover from the Rebbetzin, Rabbi Greenberg’s wife, and to have fun.

So, what is matzah?

Now, while waking in any grocery store, one can see matzah. More often then not, they are square, almost cracker-like, uniform in texture and shape. But, over three-thousand years ago, it was a bit different.

There have been debates about how, and when matzah became so thin. At one point there were such debates between the students of Shammai and Hillel, both sages, about if matzah could be as thick as your hand. But, then you would have to worry about the dough starting to ferment or rising.

About the 17th century – and I am not an authority on this, so don’t quote me – we began to see thinner, crisper matzah that was cooked very quickly. Over time, we ended up with a very think matzah that will stay fresh for longer periods of time.

For those attending the Camp Gan Israel – Spring Camp, they were able to make matzah, from start to finish.

The room was filled with children, each one with a bit of matzah dough, folding and beating it before rolling it out into a shape (Mine was nowhere near square, or round. Still, it was a shape). The excercise was more than just having fun; it was an educational experience.

They learned how to turn kernels of wheat into flour. How to mix and knead the dough, roll it out and bake it.

“They saw,” says the Rabbi, “how in a real matzah bakery they would have two separate rooms: one for flour, one for water.”

Then, when it’s time to make the dough, they learned that it is very quickly from mixing bowl to oven. Eighteen minutes from the time the water is poured into the flour, mixed, rolled out, and baked.

“So, while the truth is that the matzah the children made here is only fake matzah, it gave them the feeling and idea of what matzah is all about,” says Rabbi Greenberg “That’s really what Passover is all about.”

The Rabbi continued, “the Passover is all about education. When the Jewish people were leaving Egypt, G-d did not speak to them about the promised land. He spoke to them about the importance of educating their children, telling them the story of the Redemption, and influencing them and training them to believe in G-d and acknowledge the goodness and kindness that G-d does for us on a daily basis. That is the main theme of Passover.”

The tradition of Passover continues. The children learned how to make matzah, as well as the way of its baking. They heard the Passover story and will hear it again soon.

They have begun to learn about the Redemption, an event that sill guides, and influences us today.