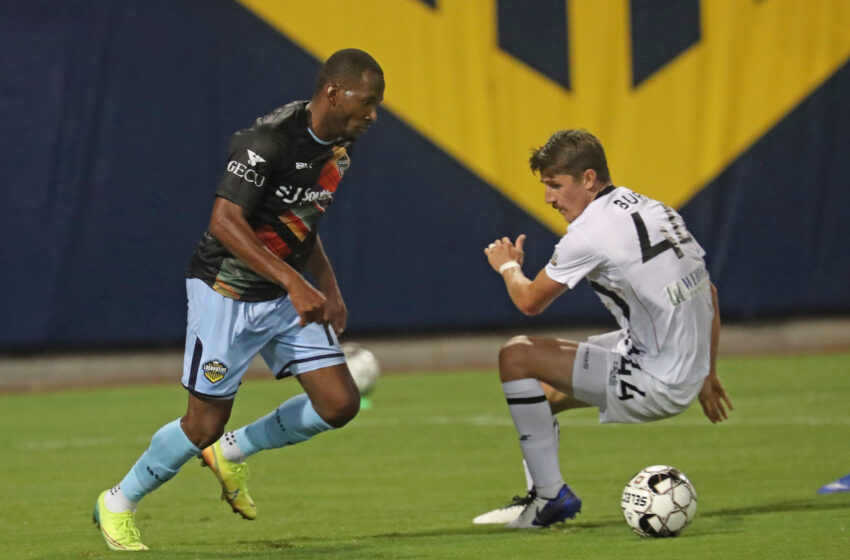 Saeed Robinson scored his first in a Locomotive jersey while Omar Salgado added to his tally. Leandro Carrijo and Eder Borelli each made the Starting XI for the first time since joining from FC Juarez.

“Momentum is such an important thing and we talked about it before the game,” said Head Coach and Technical Director Mark Lowry.

“Momentum in winning games over a period of time, momentum throughout the game to start fast and keep that tempo for 90 minutes. Momentum is a really dangerous thing and if you have it’s good, but you can lose it quickly. One game, one bad performance, one loss and you lose it quickly. While we have it, we have to make sure we keep it and that’s approaching every game every day with the same intensity and the same attitude.”

Nothing split the two sides through the first half after a narrow display saw few chances from both ends, though the best coming through Locomotive.

In the 9th minute, Chapa Herrera took a shot that looked destined for the top right bin but skimmed over the crossbar to land on top of the net. Moments later, Carrijo found himself in the right place at the six-yard line taking a shot only to find Goalkeeper Sean Melvin coming up with a big save. Locomotive began a late push, but the two sides went into the break scoreless.

Locomotive once again took advantage of set pieces, finding another goal from a served in corner kick as Robinson redirected the corner at the near post to beat out Melvin for the Loco advantage. The attacking pressure from Locomotive saw the Sun City team double its advantage in the 74th minute through a clean left-footed blast from Salgado into the far netting.

While Switchbacks FC’s Mamadi Camara pulled one back on the scoreline, it wasn’t enough to stop Locomotive claiming the full three points at Southwest University Park on Wednesday.

Up next, Los Locos finish off their week with Round 3 against their former playoff rival, Real Monarchs SLC. The match is scheduled for Saturday, September 19 with kickoff from Southwest University Park set for 7:30 p.m. MT.

ELP: Saeed Robinson (Richie Ryan), 53rd minute – Robinson opened his Locomotive goal-scoring account, flicking in a picture-perfect header at the near post to connect with the corner kick from Richie Ryan.

COS: Mamadi Camara (Own Goal), 81st minute – Taking the pass from Ferreira, Camara took a shot that took a bounce off a Locomotive defender’s foot, putting it out of the way of Logan Ketterer’s save to pull one back on the scoring.

-Forward Leandro Carrijo and Eder Borelli each got their first starts for Locomotive FC since joining from FC Juarez. Carrijo played until the 65th minute before being subbed out while Borelli subbed out in the 77th.

– Saeed Robinson tallied his first goal in a Locomotive jersey, flicking away the game-winner in the 53rd minute. His opening goal comes against his former team, Switchbacks FC.

– The win against Switchbacks FC paired with the Real Monarchs loss, Locomotive clinched a second consecutive appearance in the USL Championship playoffs.