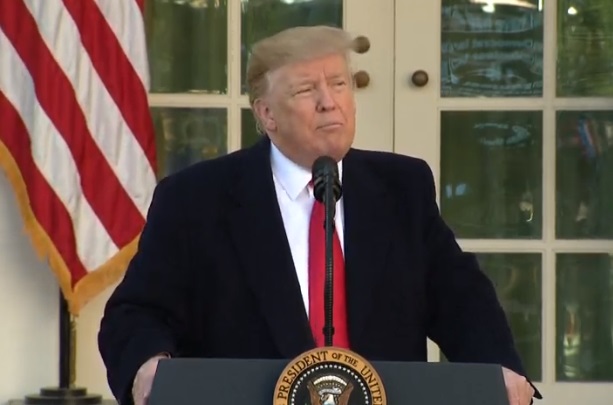 On Friday afternoon, President Donald Trump announced a temporary deal to reopen the United States Government, at least until February 15.

Via a televised speech from the White House Rose Garden, President Trump said, “I am very proud to announce today that we have reached a deal to end the shutdown and reopen the federal government.”

As part of the deal, federal workers would return to their jobs, while lawmakers return to the table to negotiate further. The new deal would not include any funding for the wall that the President had promised.

The deal would run for the next three weeks, or until the President and congress could hammer out a permanent deal.  President Trump hinted that if a deal is not reached in that time, he could declare a National Emergency.

“As everyone knows I have a very powerful alternative but I’m not going to use it at this time.”

Also during the speech, President Trump thanked the federal workers who had been furloughed or working without pay.

“In many cases you encouraged me to keep going because you care so much about our country and our border security,” Trump said. The President added that federal workers would receive back pay “very quickly.”

As the shutdown reached it’s 35th day, approximately 800,000 federal workers missed their second paycheck, with roughly half of them working without pay.

“For 35 days, President Trump and Republicans in Congress have senselessly held the American people hostage by endangering our nation’s safety and inflicting pain on hundreds of thousands of hard-working federal employees and contractors who have struggled to feed their families and pay their bills. I’m grateful for their patriotism and commend the generosity shown by the El Paso community for helping and supporting them during this troubling and difficult period.

“As Congress comes together to determine a path forward beyond February 15th, we must recognize that over the past decade, border security funding has grown to more than $8 billion without any meaningful increase in oversight, accountability or transparency. Furthermore, as we address the challenge of thousands of Central Americans fleeing their countries and arriving at our border each month, we must address the root causes and ensure that our government effectively develops a plan to deal with the changing patterns of migration in a smart, humanitarian way.”