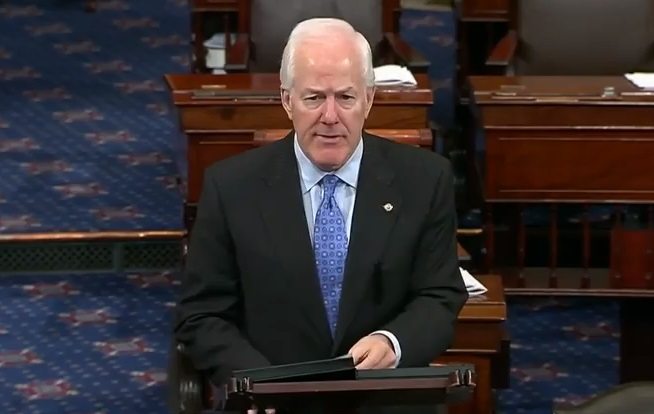 Sen. Cornyn previously introduced the Mental Health and Safe Communities Act, a bill to encourage states and agencies to upload more mental health records into NICS and to improve crisis response by law enforcement. Excerpts of Sen. Cornyn’s remarks are below, and video of his remarks can be found above.

“One woman who’s lived in Sutherland Springs for nearly 70 years described the community as a place where everybody knew everybody.”

“No community finds it easy to deal with unexpected heartbreaking losses like this. But the fact that this crime involves so many tightly-knit friends and neighbors and occurred in a house of worship on a Sunday morning and harmed so many innocent children makes the task much, much harder. As each new detail emerges from what is still an ongoing investigation, we need to study the whole puzzle, ask ourselves how did this happen, why so many lives were lost and what if anything could have been done to prevent it. We know, for example, that the gunman was court martialed by the Air Force and convicted of serious domestic abuse, fracturing the skull of his own son.”

“This critically important information from the suspect’s criminal history was not uploaded into the relevant background check databases, even though a federal law clearly requires that it be done.”

“Because there was no record of it, he was able to lie his way into getting these firearms. This is very clearly a problem, and the Air Force has now admitted that Kelley’s conviction should have barred him from ever purchasing or possessing firearms.”

“I plan to introduce legislation, and I’d be happy to work with my colleague from Connecticut, to ensure that all federal departments and agencies, including the Department of Defense, upload the required conviction records into the national database.”

“We can make the federal agencies do it.”

“According to the Department of Justice, the number of these records that are actually uploaded is staggeringly low. That is unacceptable and it must change.”

“We need to better understand why our existing laws didn’t work in this instance and that’s what my proposed legislation will do.”

Op-Ed – Cornyn: One Million Americans Getting...