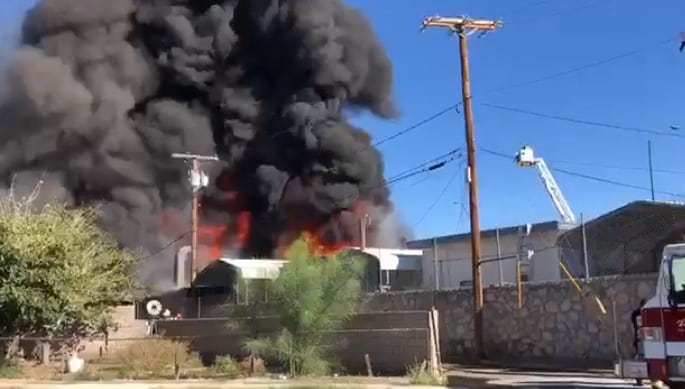 It was a hot morning for El Paso’s Bravest, as crews donned their gear for a late-breakfast battle against a large, smokey fire near Washington Park.

El Paso Fire Department (EPFD) officials said crews were dispatched shortly after 9 a.m. to the 4200 block of Alameda Avenue, after a 911 call reporting a business fire.

Upon arrival, crews from Pumper 13 began fighting the fire; and additional units were requested to the scene. After a primary search of the business, no occupants were found.

A total of 18 units and 42 firefighters responded to the incident. Texas Gas, El Paso Electric and the El Paso Police Department assisted at the scene.

EPFD Officials said that the fire did not extend to other structures, however two nearby houses were evacuated as a safety measure. No injuries reported at this time.

Via a news release, officials added, “The El Paso Fire Department would like to remind the general public that the Fire Prevention Division provides free smoke alarms. An early warning from a smoke alarm can provide valuable time to evacuate during a fire situation. To sign up for the program, please dial 3-1-1 or visit our website“.

Estimated damage cost and cause of the fire are, at this time, pending investigation.