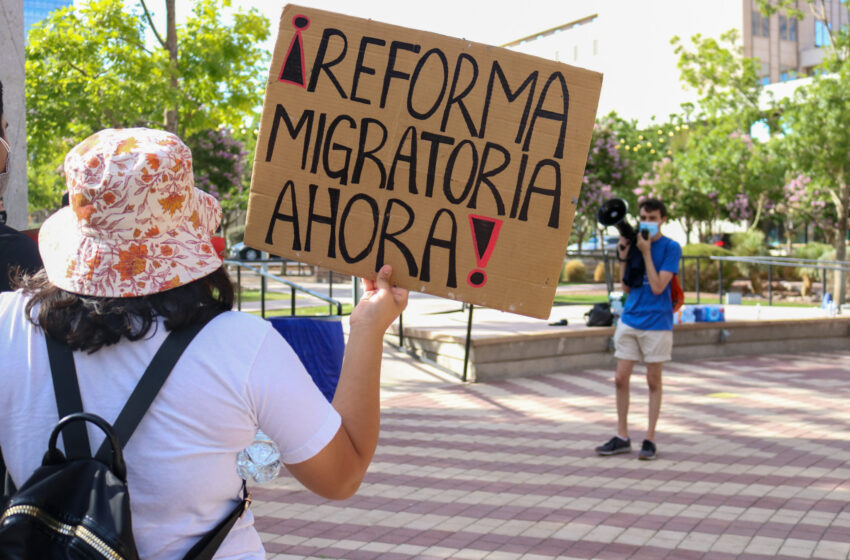 The friction between longtime immigration advocates and the current administration keeps building, with some El Paso community members joining the ongoing fight for protections for immigrants and hopes for immigration reform.

As criticism mounts against the current administration, young activists keep pushing at a local, state and national level to demand the abolition of the office of  Immigrations and Customs Enforcement (ICE).

The March for Our Lives El Paso Chapter organized a rally in support of other youth-led organizations from the Borderlands on Saturday May 29 in San Jacinto Plaza.

The local chapter is part of a larger network created after the Stoneman Douglas High School mass shooting in Parkland, Florida; triggered by a large mobilization against gun violence. The organization, among others, push for civic engagement among youth and an anti-gun movement.

“The movement behind the abolition of ICE extends beyond police reform. It acknowledges that no human should be considered illegal, regardless of their residential status,” reads the group’s call to action.

The call to action was loud and clear on the sunny, Saturday afternoon, as the young El Pasoans were chanting and holding signs demanding a “safer and nondiscriminatory border community,” as their social media posts read.

One of the organizers, Mariana Meza, described what this group reimagined for the border community as redistributing funding for “safety initiatives” for undocumented immigrants.

“I think a safer and non discriminatory border community is one that addresses the criminalization of immigrants while taking steps to demilitarize oppressive systems,” said Meza.

The local chapter is concentrating their efforts to push U.S. Representative Veronica Escobar to support a path in congress to abolish ICE and provide “fast-track immigration protections through Biden’s infrastructure plan.”

“We as a youth-led violence prevention organization are focusing on this because we recognize the intersection between ICE, the criminal justice system, and the safety of our immigrant community,” explained Meza.

This has become a communal effort, as protesters across the nation continue to raise their voices for immigrants and redistribute the funds of ICE to community based programs that will provide assistance to undocumented immigrants living in the U.S.

The bill to terminate the U.S. Immigration and Customs Enforcement was first introduced by the U.S. Representative Marc Pocan in 2018. Since then, thousands of activist groups have demanded authorities to pass the legislation or any path that will defund the federal agency.

The administration of former president Donald Trump kept reinforcing the authority of the agency for the last four years and as Democrats regained power in the White House and partially in the Senate, the immigration advocates’ expectations built up.

For the protesters, advocating for immigration policies and creating social programs for undocumented immigrants is a “responsibility.”

“As one of the largest Hispanic communities, [it] is our responsibility to advocate for just immigration policy,” said a 24-year-old Border and Latin studies student at the University of Texas at El Paso.

The 18-year old student recognized the importance of recognizing the privilege they have as U.S. citizens as well as demanding local authorities meet their demands.

These activists believe these actions will bring piece of mind to undocumented immigrants and will create a safety net for people to feel welcomed to the country — as they stated “no human is illegal.”

“This is an immigration system that does not treat people like human beings and it treats them like objects… These are people with lives and families and struggles. And we need to recognize them as such,” said a 17-year student and protester.

Joe Biden never provided a clear answer about the future of ICE during his campaign and while he has implemented alternative measures fellow democrats think the president should implement different measures, abolish ICE and redistribute the funds.

However, one of the latest changes the Biden administration made was the implementation of new guidelines for the U.S. Immigration and Customs Enforcement where the institution will “prioritize threats to national security and public safety when deciding whom to arrest, detain and deport.”

Meanwhile, the young El Pasoans hope their chants and demands for a systematic change will be heard not only at a local level but all the way to the White House.