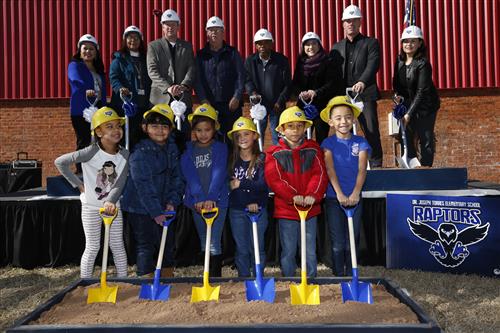 District officials and representatives from Bradley and Fannin elementary schools – the two campuses that will merge to form the new Torres Elementary – celebrated the groundbreaking of the school in front of family and friends of the school’s namesake.

“This is such an important day. Our family is beyond happy,” said Bobby Ortiz, Joseph Torres’ nephew. “Joe Torres was a wonderful person. But most importantly, he was an advocate of education and proof that El Paso schools do a wonderful job.”

The new school, which will be built on the Bradley site and is slated to open with its combined student population for the 2020-21 academic year, is named after the late Joseph Torres – a World War II veteran, dentist and philanthropist with a long list of accomplishments in El Paso.

Torres is credited with the improvement of conditions and benefits for military veterans in the region and was known for providing dental services at low or no cost to low-income families. He was an El Paso High School graduate and U.S. Army veteran.

Friday’s ceremony celebrated the start of construction at the school, and the beginning of the school consolidations that are part of the Rightsizing for the Future campaign aimed at matching the number of schools the District operates with the number of students enrolled in EPISD.

The $19.2-million construction project will build 50,000 square feet of modern, 21st-century instructional facilities that include new classrooms, a library, a multipurpose room and administrative offices.  The funding also will pay for major renovation to existing facilities at the Bradley site.

The EPISD Board of Trustees awarded the construction project contract to Aztec Contractors. The new building was designed by ERO Architects.

royal blue, black and white – a combination of the current Bradley and Fannin colors.  The administrators also unveiled the name and logo for the new school mascot, the Raptors.

“We are looking forward to starting our new chapter as Torres Elementary,” Gustafson said. “Our new facilities are going to have a tremendous impact on our community.”

Bond 2016 was approved by voters to help modernize and right-size the District.  In total, the Bond will consolidate 18 existing schools into eight new campuses.

“This is an exciting time in EPISD,” said Carmen Arrieta-Candelaria, EPISD’s Deputy Superintendent for Finance and Operations. “The work we are doing here at Torres and throughout the District with the Bond 2016 funds will go a long way in making sure that our students have access to world-class facilities and top-notch educational services.”

For more information about Bond 2016 log on to District’s bond webpage.