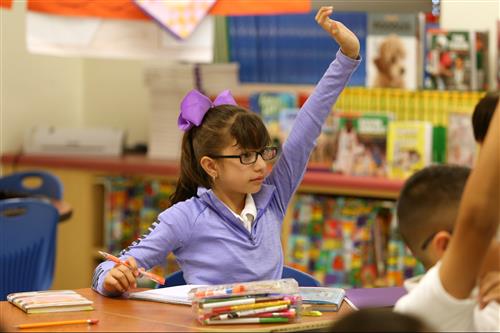 EPISD’s next venture into New Tech will pioneer the project-based learning approach for which the program is known and combine it with the District’s nationally recognized dual-language curriculum.

Hart New Tech will be EPISD’s first elementary school with the collaborative learning program in the city, and just second in Texas. It also will be the first-ever dual-language New Tech school in the country.

“It’s an exciting opportunity to see what will happen when we introduce this type of learning at the elementary school and then see the student progress through high school,” said Scott Gray, New Tech Network coordinator.

The program will begin next year with third through fifth grade, and the following year kinder through second grades will be added.

Eventually, Hart students will be able to go from kinder to 12th grade in New Tech, which is offered at feeder campuses Guillen Middle and Bowie High School.

The addition of New Tech at Hart is funded by a $1.3 million grant EPISD received from the Texas Education Agency. The money will help train teachers and staff, and also will pay for the physical transformation of classrooms into active-learning spaces.

The New Tech approach has its advantages for dual language students when learning a second language. Students with varying abilities in English and Spanish work collaboratively to learn and build their language capacities.

“They tend to succeed because they’re building context,” Gray said. “They are taking ownership of their learning and tying what they’re learning to real world problems and solutions.”

Gray works closely with EPISD’s eight existing New Tech campuses and has been tracking data that shows New Tech students tend to out perform their traditional classroom peers nationally and within EPISD. He also said attendance rates are dramatically higher for students in New Tech programs.

The grant, which is meant to transform teaching and learning at Hart, required EPISD to install a principal who had fewer than two years experience at the campus.

“I want to thank the Alta Vista community for being part of my journey as principal and teaching me so much. I know Ms. Pragner is going to excel there because of the dedicated teachers and wonderful students,” Negrete said.

“I am excited to take on this role at Hart and to have the opportunity to develop what I know will be an innovative and impactful program,” she added. “Students here at Hart will become very critical thinkers, which will provide them with more opportunities to be more ready for high school and even beyond high school.”