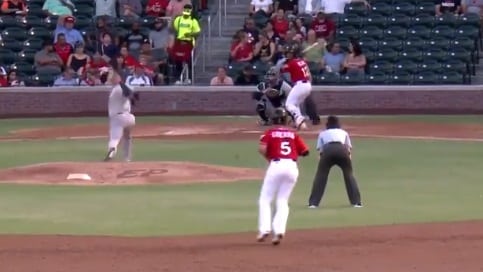 The playoffs-bound El Paso Chihuahuas beat the Tacoma Rainiers 9-4 on Sunday in a no-nonsense style poised for post-season success.

The Dogs came in hot from losing a 17 home-game winning streak on Saturday and established their dominance early and never looked back. El Paso put three runs on the board against Tacoma starter David Rollins in the first inning by stringing hits together. Rollins faced eight Chihuahuas and gave up five singles and three RBIs, El Paso 3-0.

The assault on Rollins (9.61 ERA) continued in the bottom of the second with a two-run shot that was launched off of Francisco Mejia’s bat and straight into the glove of a fan on the Peter Piper Pizza Porch.

Three consecutive singles brought in one more run and Rollins finally managed to get out of the inning by striking out Dusty Coleman, El Paso 6-0.

Tacoma showed a little life in the fourth inning with an RBI single by Seth Mejias-Brean (.266 BA), El Paso 6-1.

El Paso answered in their half of the fourth inning by loading the bases with no outs before Allen Craig hit into a double play but brought in Mejia to make it El Paso 7-1.

The Rainiers came back in the seventh and eighth and threw up another three inconsequential runs making it El Paso 7-4.

The fiery dogs came back in the eighth and added another couple of runs just to remind the Rainiers who was on top and go to the ninth with a five-run lead, El Paso 9-4.

El Paso righty Kyle Lloyd set them down in order in ninth inning and giving teammate Cal Quantrill (3-1) the win and Rollins his third loss.

After Monday’s final game in the Tacoma series, El Paso (82-56) will begin their quest for the 2018 PCL title against the Fresno Grizzlies (81-57) on Wednesday.

No doubt about this one!@FranMejia95 launches a 2 Run Dinger pic.twitter.com/PiFI9aKIAR