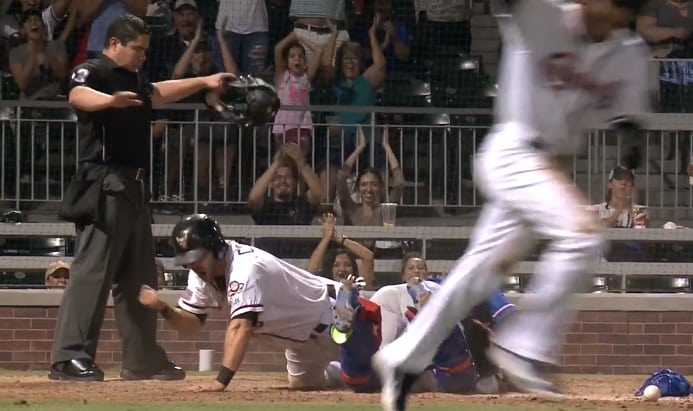 Chihuahuas fans who may have missed the fireworks shows this season, got their money’s worth Tuesday night via the on-field baseball pyrotechnics in the 7-6 come-from-behind win over the Round Rock Express.  Fans were even treated to a shouting match between manager Rod Barajas and the home plate umpire late in the game.

The Dogs won their seventh consecutive home game – a first for the 2018 season – and are now a more comfortable 4 1/2 games ahead of the Salt Lake Bees in the PCL Pacific Southern Division with just 25 games left in the regular season. The Bees lost again to the Omaha Chasers on Tuesday 5-0.

The Dogs started their assault with a Javy Guerra triple to right field that was just a few feet from going over the fence and followed it with a walk by Dusty Coleman. With men on the corners, Forrestt Allday singled and Guerra scored on a bad throw from the third baseman, El Paso 1-0.

Second baseman Luis Urias moved the runners station to station and left it up to catcher Francisco Mejia. Mejia had a hard-hit grounder to second and the speedy Coleman raced home and Allday advanced, El Paso 2-0. Designated hitter Raffy Lopez doubled in Allday for the third and final run of the third inning, El Paso 3-0.

The Express were kept quiet by El Paso starter Jerry Keel (3.60 ERA) until the fifth inning.  That’s when he gave up a two-run home run to DH Tony Sanchez (.322 BA), El Paso 3-2. The Express followed with an RBI double by second baseman Christian Lopes (.242 BA) and tied the game 3-3.

The Chihuahuas came back in the bottom of the fifth, believing they were bigger dogs and scored two more runs. First baseman Allen Craig came up to the plate with two men on and hit a bases-clearing double, El Paso 5-3.

In the seventh inning, the Express scored three runs; with the first run crossing the plate thanks to a looper to center field. The next two came in on a single by third baseman Andy Ibanez, Round Rock 6-5.

And then in the seventh the fireworks went off. The home plate umpire had already punched out the last two Chihuahuas in the sixth, with what appeared to be a shifting strike zone when he cashed out leadoff man Allday. Allday turned to talk to the umpire about the call as he walked toward the dugout and was intercepted by Barajas but not before he tossed Allday.

Barajas, a former MLB catcher, was apparently already steamed about the strike zone victimizing the Chihuahuas in the sixth and threw his cap at the umpire’s feet. Barrajas was at the umpire’s face when the shouting match began and the crowd roared.

The heated discussion lasted less than a minute but would have made Hall of Fame manager Tommy Lasorda proud. Barrajas was also tossed of course, but not before firing up the Chihuahuas dugout and the home crowd.

The Dogs came up in the ninth not just as bigger dogs but as rottweilers – undoubtedly inspired by Barrajas’ passion. Guerra bunted his way on for a single. Coleman doubled down the left field line and Guerra was stopped at third.

Brett Nicholas replaced Allday in the lineup and with the crowd crossing their fingers, singled to right field and scored Guerra and Coleman for the walkoff and seventh consecutive win, El Paso 7-6.