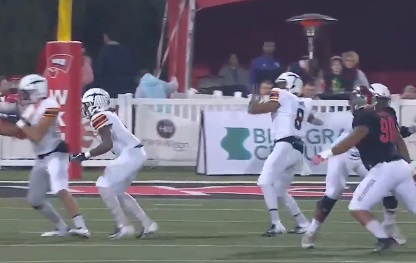 BOWLING GREEN, Ky. – UTEP quarterback Brandon Jones threw for a career-high 340 yards and two touchdowns. But four first quarter turnovers did UTEP in, as WKU scored the game’s first 40 points, including 27 during the first quarter as the Miners fell 40-16 on a brisk Saturday night at Houchens-Smith Stadium.

After an abysmal first half (down 40-0), the Miners put up a fight in the second half.

“We didn’t start as well as we needed to start and had a lot of turnovers,” first-year UTEP head coach Dana Dimel said. “Five turnovers in the first half all by interception were critical mistakes and led to some great field position and great momentum from [WKU] allowed them to take some chances and they executed. We obviously didn’t play well in the first half.”

WKU gained 422 yards of total offense, while Steven Duncan passed for 214 yards and two scores. Quin Jernighan caught seven passes for 82 yards and a score, while the Hilltoppers ran for 208 yards on 50 carries and two touchdowns.

“During the second half, I was really proud of the effort we put out and coming back and keeping our fight,” Dimel said. “We tried to get to a two-score game at the end if we could’ve got in [the end zone]. So, I was proud of that part. Now we’re moving forward with this last game for our seniors who have been incredible this year.”

With the score 40-8, Jones found senior David Lucero down the left sideline and he took it 88 yards to pay dirt. It was a career-long play for both and the longest scoring play since Aaron Jones’s 91-yard touchdown run at Texas Tech in 2015.

Jones made the score 40-16 when he hooked up with Lucero again, this time on the two-point conversion.

Jones’s 340 yards were the most since Jameill Showers’s 365-yards passing at Colorado State in 2013.

The Miners opened the second half with a 75-yard, seven-play scoring drive. During the drive on a third-and-16, Brandon Jones rushed for 15 yards to the UTEP 34. Dimel elected to go for it on fourth-and-1 and was successful. The offense was in a bunched formation when Jones dropped back, throwing off the WKU defense and completed a short pass to Josh Weeks. The tight end took it for a season-long 38 yards to the WKU 28-yard line. Three plays later, Jones hooked up with Terry Juniel. Jones followed with a completed two-point attempt to Warren Redix, making the score 40-8.

WKU then went three-and-out on its first offensive possession in the third quarter.

Tre’shon Wolf followed with a career-long 48-yard reception from Jones into WKU territory. But the Hilltoppers’ defense stopped the Miners on a fourth-and-two play.

But WKU was too much after UTEP fell 40 points back. The Miners got the ball to the WKU six-yard line, but couldn’t find the end zone after four plays with under two minutes remaining. WKU got the ball back and ran the clock out.

Wolf gained a career-high 63 yards on a trio of catches.

A.J. Hotchkins kept doing what he does best, which was tackling. He was credited with 12 tackles, his seventh double-digit performance of 2018, while the senior linebacker tallied a career best of two sacks.

Justin Rogers tallied a career-high nine stops, while Sione Tupou tied his career best with nine tackles. Kalon Beverly intercepted his second pass of the season during the fourth quarter. It was also Beverly’s fourth of his career.

UTEP will conclude the 2018 campaign on Nov. 24 as it will host Southern Miss on ‘Senior Day’ in the Sun Bowl Stadium with a 1 p.m. kickoff.