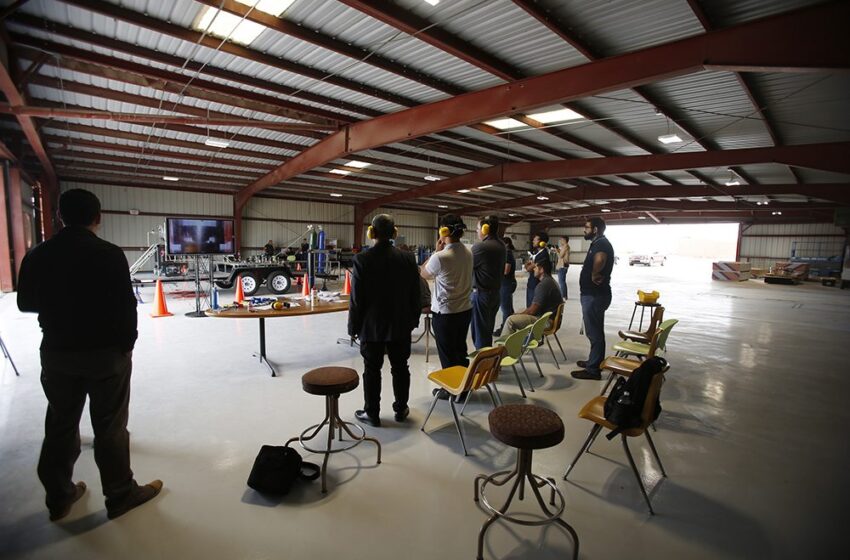 â€śWe have been looking forward to taking this step out here since the project was first announced last fall,â€ť said Ahsan Choudhuri, Ph.D., director of the NASAÂ MIRO Center for Space Exploration and Technology ResearchÂ andÂ tRIACÂ project lead. â€śThis larger facility near the airport allows us to conduct testing restricted at our campus location, advancing our ability to research combustion.â€ť

The testing will demonstrate that the use of oxygen combustion, instead of industry air combustion, will increase efficiency andÂ help sequestrate 90% carbon dioxide from fossil energyÂ power plants. Students have spent nearly one year on the project, from the design phase to the last three weeks of setup. The next step in the research will entail increasing the amount of pressure.

â€śThe success of our initial testing out here validates the work of our student researchers and our program,â€ť Choudhuri added. â€śWe were ready for this opportunity to expand our footprint in the community. This continues our trajectory to positively impact the region and the future of UTEP as a contributor to economic development.â€ť

The EDA grant money will be matched by UTEP for a total investment of $1 million and will go toward the development of the facility. The University partnered with the County of El Paso on the venture and announced efforts for the area adjacent to the airport in fall 2016.

Renovation at the site started in April 2017 in the existing hangar used for Wednesdayâ€™s testing. In recent weeks, students began working in the facility, and the interior of the hangar is taking shape. Once complete,Â tRIACÂ will consist of multiple sites, including a test site and data center, a rocket tower and incubator facilities for small businesses.

The next phase of construction is expected to start by the end of the year.