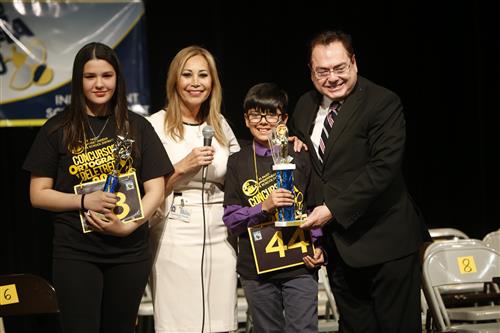 Students from throughout the District went toe-to-toe earlier this week during the EPISD Spanish Spelling and Grammar Bee that ended after five nail-biting rounds with the correct spelling of the word inenarrable, or indescribable.

Wiggs Middle School sixth-grader Iker Pérez withstood 59 other competitors from 30 elementary and middle school campuses to win this year’s competition and qualify for the National Spanish Spelling Bee this summer in San Antonio. EPISD’s competition was held at the Chapin High School auditorium.

Iker outlasted runner-up Miranda Lara, an eighth-grader at MacArthur, after she misspelled the word brahmanismo, the Spanish word for the Brahmanism religion. Iker successfully spelled both brahmanismo and inenarrable to win the competition.

“Really exhilarating,” Iker said, when asked how he felt about winning.

He began participating in the Spanish Spelling Bee as an elementary student, going over words with the coordinator and developing a knack for determining where and if a word needed an accent. Iker’s regularly asked the pronouncer for a definition and a sentence to ensure he knew the origin of the word. This strategy paid off for the final words.

“One of the latest words, I didn’t know how to spell until they gave me the definition because it was mostly a religion,” he said referring to brahmanismo.

The two competitors spent more than five minutes going back and forth. Both missed words during the final rounds but were unable to secure the win by spelling correctly two consecutive words until the word brahmanismo came up.

“It was exciting but I was so nervous because he is very good,” Miranda said.

Guadalupe Pineda, a Polk Elementary dual-language teacher and the Spelling Bee coordinator, stood on stage watching both students trade words until the end.