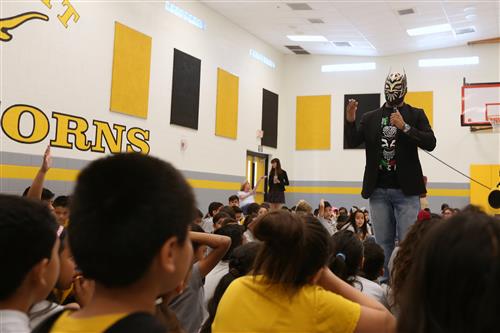 Crockett Elementary School got a little taste of the glory Thursday morning when WWE wrestler Sin Cara stopped by the school to share some knowledge with the students.

Although the wrestler didn’t show them how to master the perfect springboard moonsault, they learned something more important than wrestling moves: the message that bullying other kids is just not ok.

“When I was growing up, I didn’t have a lot of opportunities. In the Segundo Barrio it was difficult. I wanted to talk to them and let them know that no matter your circumstances you can overcome,” he said. “I usually don’t get to do a lot in my community because I travel so much, but it’s very important for me to give back to where I came from.”

Crockett family intervention specialist Adriana Peña knew Sin Cara since they were elementary students, inviting him to come and talk to the students. Because of his masked persona, EPISD will not reveal the real name of the wrestler.

“It’s a great blessing that he can take the time out of his busy schedule to come visit us,” she said. “He really identified with the kids about what some of them go through during their school-age years. I hope the meeting him teaches the students they can accomplish anything they set their minds to.”

Sin Cara, who is an Burges High School graduate, shared his own struggles with bullying in elementary.

“I faced some tough situations, but I was fortunate that my parents backed me up,” he said. “My dad taught me I had to stand up for myself. You have the power to control how it affects you. If you are being bullied, you need to tell an adult. You have to communicate because you are not alone.”

The wrestler encouraged students to not just be bystanders when they see someone else getting bullied.

“If you see someone else getting bullied, you need to say something,” he told them. “You have to support each other.”

Third-grade student Yamil Zamora was one of the lucky students to receive a t-shirt from the wrestler for answering a question about bullying.

Fourth-grader George Huitron counted down the days until the wrestler came to school.

“All of us were very excited,” he said. He gave us an important message about bullying. He told us we should be kind to others.”

“The biggest impact in my life was the people who helped me and believed in me,” he said.

“It takes a long time and a lot of struggling. I’ve been through a lot of things in my life, but I wouldn’t change anything because that has made me who I am as a person. I can show them no matter what dream they have, whether they want to become a lawyer or a doctor or teacher, if you have faith in yourself you can make it happen.”

Story and photos by Alicia Chumley – Video by Raymond Jackson/EPISD