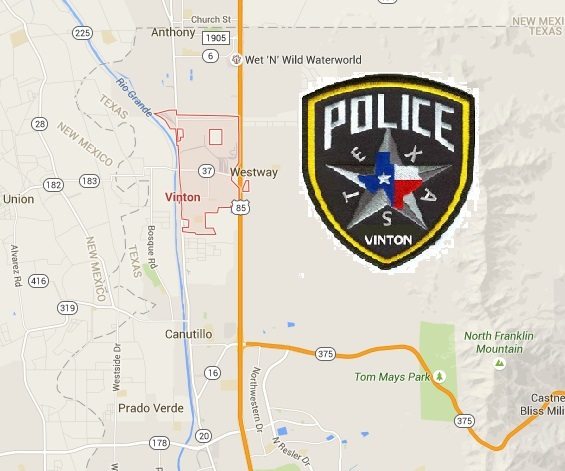 Vinton, TX – After careful deliberation and 6 separate budget workshops, the Village of Vinton City Council has decided to eliminate the Police Department effective September 30, 2015 at 5:00 p.m.

The Village of Vinton was presented with a preliminary budget which would have placed the city in a deficit and would not have been able to carry balanced budget.

“Vinton currently has a deficit of $148,506, if we continue to fund the Police Department, the building they’re in currently needs over $165,000 in repair and in upgrades to become ADA compliant, it will bring our deficit to $313,612.” states Mr. Lucero, Vinton Alderman Place 4.

Lucero went on to say, “Our primary goal is water and sewer for all of the residents, if the agencies we have applied to for funding see we’re intentionally budgeting a deficit, they more than likely will not fund us for the much needed water.”

Water and sewer is the number one priority for the City Council and, without a balanced budget, funding agencies such as the United States Department of Agriculture and the Texas Water Development Board may not fund either project.

All of the departments were looked at for additional cutbacks. Public Works and the Administrative Department reduced their initial budgets and are both currently working with limited staff.

The elimination of the Police Department will not affect the safety of the residents. The El Paso County Sheriff’s Department will continue to patrol the area. The Sheriffs Department has a patrol unit assigned solely to Vinton.

The Village of Vinton is a small municipality west of El Paso with a population of 1,971. Vinton has struggled to receive funding assistance for the water and waste water projects in previous years due to a lack of consensus from City Council members and failure to approve balanced budgets and property tax assessments on time.