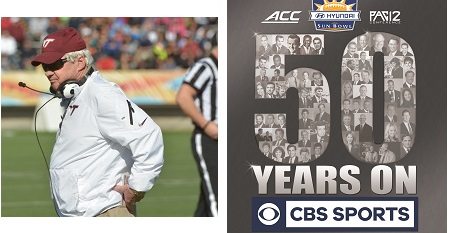 The Sun Bowl Association and Hyundai announced that former Virginia Tech player and head coach Frank Beamer along with CBS Sports are the 2017 Legends of the Sun Bowl for the 84th Annual Hyundai Sun Bowl.

Frank Beamer retired from Virginia Tech in 2015 with an impressive career record of 238-121-2.  Virginia Tech found plenty of success under Beamer as it made 23 consecutive bowl appearances, including an appearance in the 80th Annual Hyundai Sun Bowl in 2013.

“It was an honor for Virginia Tech, our football program and myself to participate in the Sun Bowl,” Beamer said.  “I am also honored to be inducted as a Legend of the Sun Bowl.”

While at the helm for Virginia Tech, Beamer led the charge helping his team post 23 straight seasons of seven or more wins, longest streak in school history. He also guided his team to the BCS National Championship Game in 1999 against Florida State.  Beamer helped the Hokies to become one of only six programs in college football history to go to a bowl in at least 20 straight years (Nebraska, Michigan, Florida State, Alabama, Virginia Tech and Florida).

Beamer also helped his team compile a school-record streak in the Associated Press Top 25 Poll at 84 consecutive weeks. His team also earned seven conference titles and eight “major” bowl bids in a 23-year span. Including his tenure at Murray State from 1981-86, he finished his illustrious career with 280 head coaching victories.

“Hosting Mr. Frank Beamer and his team in 2013 was such an honor and pleasure,” said Executive Director of the Hyundai Sun Bowl Bernie Olivas. “We are extremely excited to have Coach Beamer back in El Paso and talking with him, we know he is excited to come visit the Borderland.”

The Sun Bowl Association is also inducting CBS Sports as a Sun Bowl Legend this year in accordance with the celebration of 50 years of partnership.

“We have such a great relationship with CBS and they have treated us extremely well over the years, it’s simply the logical and right thing that we honor the company as a Sun Bowl Legend,” Olivas said.  “CBS has helped put us among the best-of-the-best bowl games in the country and we cannot thank them enough.”

Jim Nantz, who called the play-by-play action for the Sun Bowl numerous times, has called the Master’s for 32 consecutive year on CBS.

“The Hyundai Sun Bowl’s history is on the field and in the booth,” Olivas said. “El Paso has been lucky to have CBS showcase the game and the City of El Paso for 50 straight years.”

Producer Craig Silver was inducted in 2008 after producing the game from 1983-2005. He also produced the game in 2008 and again from 2009-16.  Silver has been a part of over half of the CBS broadcasts and has won multiple sports Emmy Awards and has produced multiple Winter Olympic broadcasts on CBS. He also produced several NCAA basketball tournament broadcasts, including the 1992 NCAA East Regional final between Duke and Kentucky, when Christian Laettner hit the buzzer-beater to lift the Blue Devils over the Wildcats to advance to the Final Four.

CBS Sports will bring viewers all the color, artistry and drama inherent to the nation’s second oldest bowl game with live coverage of the Hyundai Sun Bowl on Friday, Dec. 29 (3 p.m. ET; 1 p.m. MT). The game features select teams from the ACC (Atlantic Coast Conference) and the Pac-12.

Story in Many Pics: Florida State to...