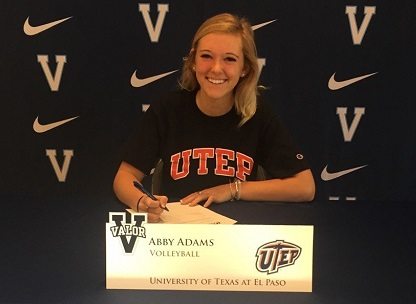 “I chose UTEP because of the competitive Biology academic program, and the Pre-Dentistry curriculum,” Adams said. “I am excited about all the courses they have to offer. UTEP is a beautiful campus, and a university full of tradition. I am looking forward to being a part of the University of Texas at El Paso and the volleyball program.”

Adams is 5’8 from Valor Christian High School in Highlands Ranch, Colo., where she played at the defensive specialist position for three years.  During her time with the Eagles, Adams took the court in 157 sets as the starting libero while tallying 440 digs at 2.8 digs per set, 56 assists, 19 service aces and 14 kills.

The Valor Christian squad wrapped up the 2016 season by finishing in the Final Four of the 4A State Volleyball Tournament for the second time in school history. Adams finished her senior campaign earning accolades for her work in the classroom and on the court.

“We are excited to add Abby to our roster for the 2017 season,” Watts said. “Abby comes in with her experience as a defensive player and specifically libero, she will bring additional ball control and experience at a high level to our gym.

“We are thrilled she has decided to come to UTEP and bring her back-row prowess with her. She is playing again this club season with a quality club and great coaches and she will continue to gain experience even before her arrival.”

Aside from high school volleyball, Adams played club volleyball since the age of nine. She plays for Colorado Juniors 18 Jess, who will play in the 18 Patriot Division of the 2017 Girls’ Junior National Championships (GJNC) in Minneapolis this summer.