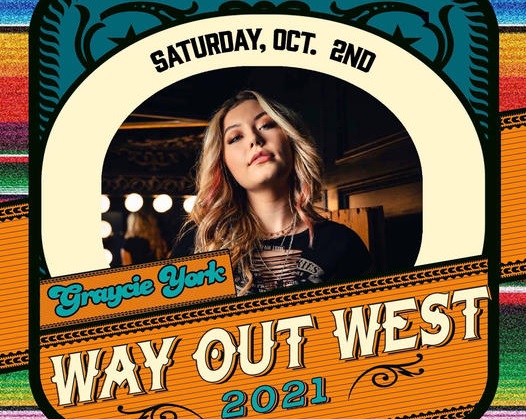 Way Out West Fest organizers announced Monday that the final addition to the festival stage line up will be Graycie York.

York is scheduled to perform along with Cody Johnson, Randall King and The Powell Brothers on October 2nd at Southwest University Park.

Born and raised in Rockwall, Tx, Graycie York has quickly made a name for herself in the Texas Country  Music scene. She released her first single called “Patsy Kind of Night” in March of 2020 and soon after released her EP ‘Words To Say.’

More recently the release of a well-known song ‘Texas Rain’ which York sings from a female perspective, has been streamed over 600,000 times on Spotify putting York in the top 15 of the Texas Music Pickers chart & has landed her a top spot on the Texas Music Now playlist. She has over 40,000 monthly Spotify listeners and is growing daily.

The fifth annual Way Out West Fest, El Paso’s country music festival, will be held on Saturday October 2nd at Southwest University Park and will feature artists from the great State of Texas including Cody Johson who will headline the festival with special guests Randall King, the Powell Brothers and Graycie York.

Prices for tickets are $35 for GA and $50 for Floor. Group tickets and packages available by calling 915-533- BASE or emailing Tickets@epchihuahuas.com .

Westar Club and VIP tickets are sold out. More information on tickets and all ticket purchases may be made through
www.epwayoutwest.com, www.southwestuniversitypark.com or the Ballpark box office.

For our complete coverage of Way Out West Fest, click here.